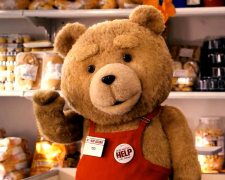 Back in May, I spent a week travelling with the Queensland men’s amateur golf team on a trip to South Australia.  We were on the team bus and the subject matter turned to upcoming movies that they were keen to see.  Ted was on top of their list.

You only have to look at the trailer to see the appeal.  It’s a low-brow comedy that has come from the mind of Seth MacFarlane, the creator of the popular animated series Family Guy.  You may not recognise his face but if you’re a fan of Family Guy, you’ll certainly know his voice – he’s the man behind Peter, Brian, Stewie and Quagmire.

The story centres on a middle aged guy named John (Wahlberg) who has been living with his girlfriend, Lori (Kunis), for a number of years.  They’re not married and they don’t have any kids.  They do have one other member of the household, however – a large, talking teddy bear named Ted (voiced by MacFarlane) who has been John’s best friend since he was a child.

So how does this make any sense?  In what kind of world do we have a talking teddy bear that walks the streets and goes about his day with minimal fuss?  Wouldn’t people be staring at him?  Wouldn’t talk show hosts have him on their programs as a regular guest?  They’re valid questions which are (mostly) addressed in a humorous sequence just prior to the opening credits.

Ted is a great character.  He’s foul mouthed, politically incorrect and has a penchant for debauchery.  I can best describe him as a cross between Howard Stern and Hugh Hefner.  It should therefore come as no surprise to learn that the film has been rated MA in Australia for its “strong sexual references, coarse language and drug use”.  Many will love the offensive material but I acknowledge that some will not like it.  You’re probably best to use Family Guy as a benchmark.  If you think that’s a show full of dumb, puerile humour, you can avoid Ted like the plague.

This is a film to be enjoyed for its one-liners. Admittedly, the best stuff is in the trailer but there were still many moments that left me laughing openly.  There are plenty of jokes to be made about a filthy teddy bear (that’s obvious) but the film has a surprising number of references to Hollywood, celebrities and general pop culture.  Some of it is really bizarre (e.g. Tom Skeritt).

It’s just a shame the broader story couldn’t have been stronger.  Put simply, Lori has grown tired of Ted’s infantile behaviour and believes it’s rubbed off heavily on John who looks like he’ll never grow up and become a responsible adult.  She puts an ultimatum to John along the lines of “either he goes or I go”.  John eventually agrees and helps Ted move into his own apartment but this creates even more complications.

This set up creates too much drama in the film’s second half and let’s be honest, we all know where the story is heading.  I’ve a hunch that most members in the audience would rather be following Ted’s crazy antics than the up-and-down relationship of John and Lori.

Having opened to a box-office of more than $50m in the United States last weekend, it seems Ted is on track to become one of the year’s most successful comedies.