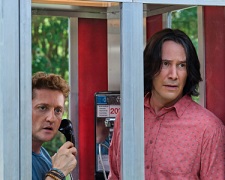 We’ve seen a bunch of old movie franchises reinvigorated in recent years (e.g. Rocky, Terminator, Jumanji) but if you’d asked a few years ago, I would never have predicted another Bill & Ted film.  The last was released way back in 1991 (Bill & Ted’s Bogus Journey) and in the three decades since, star Keanu Reeves has grown up and built a reputation as a bankable action hero with series including The Matrix and John Wick.

That said, in a year that would be described by most as “depressing”, it feels like just the right time to be reintroduced to Ted Logan (Reeves) and Bill Preston (Winter).  There’s something here for people of all ages.  Older audiences will get the chance to reminisce and see what became of these beloved characters (even the Grim Reaper is seen again).  Younger audiences will meet them for the first time and, hopefully, they’ll be inspired to find the original movies on a streaming service.

Set in the current day, we learn from the opening scenes that nothing has really changed in the life of Bill and Ted.  They’re now married with kids but their goal is still the same – to keep writing and playing music until they become famous.  You’d have hoped they’d found success by now but sadly, they’ve been “banging their heads against the wall for 25 years” and they remain penniless and unknown.

That may be about to change.  Some funky stuff is going on in the space-time continuum and the world is unravelling.  A woman from the future (Schaal) has travelled back to the year 2020 and entrusted Bill and Ted with an important assignment.  They have 77 minutes to create “the greatest song ever written that will unite the world” and if they should fail, the world will disintegrate.  Suffice to say it’s a heavy burden to carry.

Given they lack creative prowess, their first thought is to cheat.  They use a time machine to travel into the future, meet their older selves, and “steal” their own iconic song.  It won’t be that easy though.  Helping them along the way are their two wives, their two daughters and a handful of musical legends with something valuable to offer.  Hindering them is a killer robot with a quirky personality.

These characters are moronic but also hilarious.  The storyline is so silly that you can’t help but laugh.  There’s a lot to like about the cast but the two standouts are Bridget Lundy-Paine (Atypical) and Australian Samara Weaving (Three Billboards Outside Ebbing, Missouri) as our heroes’ two daughters.  They mimic the vocabulary and mannerisms of Bill and Ted with precision while also having a sense of originality.

A few scenes don’t reach their full potential (such as a moment involving Jillian Bell as a marriage counsellor) but on the whole, Bill & Ted Face the Music is good old-fashioned fun.