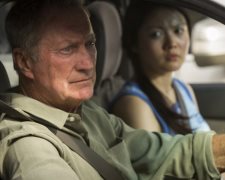 A lot has changed in terms of film distribution models over the past few decades.  I can remember back to the days when a film would come out in cinemas and then wouldn’t make it to video stores until about a year later.  Given the disruption (both good and bad) caused by the internet, the models have changed to give the public a wider range of options to consume content.

Australia Day is the latest movie to try a different path in search of financial success.  It’s about to get a three week run in local cinemas but at the end of the first week, it will also become available online for consumers to purchase and watch.  It’ll be interesting to see how it performs and whether other low-budget films follow in its footsteps.

Valentine’s Day, New Year’s Eve and Mother’s Day were all directed by the late Garry Marshall and based on the title of this feature, it may appear that writer Stephen Irwin has borrowed from his hymn sheet.  That’s not really the case though.  While the film is set across a 12 hour period on Australia Day, one could argue that such events could take place on any day of the year.  It’s a story about family, race, crime and revenge.

The film opens with a Run Lola Run style running scene with multiple protagonists.  Events have taken place, some people are on the run, some are trying to solve a mystery.  There’s a guy (Brown) who is penniless and is about to lose his home.  There’s a young Asian woman (Wu) with an injured foot in search of her embassy.  There’s an Iranian-Australian teenager (Anton) who has been abducted and bashed.  There’s a 14-year-old Indigenous girl (Madden) in search of her drug-addicted mother.

This is a busy film… perhaps too much so.  I like things “thick and fast” but with so many storylines, there’s not a lot of time to question the actions of these characters.  As an example, Bryan Brown’s character has plans involving a high profile politician but they feel a bit goofy as we don’t know enough about his history.

Director Kriv Stenders (Red Dog) does the best he can with the material and is well supported by AFI Award winning editor Nick Meyers (Balibo, The Rocket).  Things are a little sluggish through the middle stages but they wind the tension up as the storylines come together and reach their climax.  You’ll still be interested in how events unfold during the final 15-20 minutes.  It was all shot in Brisbane and given many scenes take place outdoors, fans of the city will enjoy spotting local landmarks.

Australia Day has something to say about cultural “wars” within this country but I can think of other Aussie movies with a more focused narrative (e.g. Mystery Road and Japanese Story) that left a deeper emotional mark.