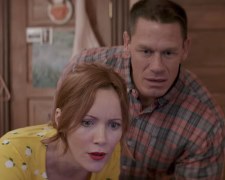 Mitchell (Cena), Lisa (Mann) and Hunter (Barinholtz) each have a teenage daughter and each has a different approach when it comes to parenting.  Mitchell is the over-protective type.  He lays down firm ground rules and keeps a very close eye on his daughter’s activities.  Lisa is the smothering type.  She treats her daughter like a best friend and wants to spend every minute of every day with her.  Hunter is the laidback type.  He jokes around, keeps a low profile and tries to give his daughter plenty of space to be herself.

They’re as different as chalk and cheese but one thing has brought these three people together in search of a common goal.  Their daughters, who are best friends at school, have made a pact to lose their virginity on prom night.  They know of this because Lisa was snooping around on her daughter’s laptop and read the text messages between them.  Determined to protect their innocence, Mitchell, Lisa and Hunter head to the prom and the related after parties to “block” their boyfriends so that no sex can take place.

It’s a nutty storyline but Blockers works because of the comedic chemistry between the three leads – John Cena (Trainwreck), Leslie Mann (17 Again) and Ike Barinholtz (Neighbours).  They argue continually throughout the movie and are placed in an assortment of crazy situations.  There are a few set pieces which feel rushed and abbreviated (such as a scene where they break into an occupied house) but on the whole, the jokes hit the mark and audiences will be laughing out loud.

I do want to make a comparison to one of my favourite comedies of 2017, Girls’ Trip.  It too pushed boundaries with its edgy, MA-rated laughs but below the surface was a more serious storyline about friendships and how they change over time.  Blockers strives to be something more by exploring the relationships between parents and siblings but it doesn’t dig as deep and doesn’t make as strong an impact.  I didn’t care that much about these teenage girls and their respective boyfriends.

Marking the directorial debut of Kay Cannon, the American writer behind the Pitch Perfect franchise, Blockers is an above average comedy that’s easy to engage with.