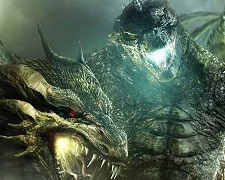 Since franchises and “universes” are the rage in Hollywood, this is Legendary Entertainment’s attempt to get in on the action.  Godzilla II: King of the Monsters marks the third film in the series following on from two reboots, Godzilla (2014) and Kong: Skull Island (2017).  If you’re wondering where it goes next, prepare yourself for Godzilla vs. Kong which is slated for release in March 2020.

As for this film… it picks things up about 5 years after the original.  The world now knows that monsters are real and the political fall-out has been huge.  That’s particularly evident within a government-run organisation known as Monarch.  It was originally established to locate and destroy monsters to ensure mankind remains the dominant species.  There’s now a differing view held by some within Monarch that the monsters (or most of them) are friendly and to kill them would disrupt the world’s natural order.

It turns out there are roughly 17 monsters on the planet, including Godzilla, and a team of scientists have been studying their genetic composition.  It may sound ridiculously dangerous but the monsters are in a hibernating state.  A catalyst is required to create drama and it comes in the form of an eco-terrorist (Dance) with confusing motives.  On one hand, he wants to make money by trading monster DNA but that seems counterproductive considering he wants to kill most living things on the planet.

In the same vein as the 2014 film, I’d argue that the human characters in this movie have the charisma of a wet sponge.  They’re a dull, boring group of people who between them, magically have the answer for every problem.  It’s part of the reason why there’s so little tension in the movie.  These characters should have died countless times but help and/or good fortune always arrives at the last possible moment.  The only actor worthy of a mention is Bradley Whitford (The West Wing) who adds a splash of comedy to break up the tedium.

It’s the monsters who should have provided all the excitement but writer-director Michael Dougherty struggles to creating something meaningful amongst the chaos.  We can see a myriad of monsters duking it out (the three-headed dragon looked cool) but it’s largely the same stuff from scene-to-scene.  I wish I’d kept count of how many buildings were destroyed.  I’m sure there were humans in them but it’s best not to think about that.

Godzilla II: King of the Monsters can be pitched at those looking for two hours of simple, mindless entertainment but it’s offering little when it comes to originality and memorability.