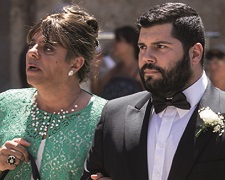 It may sound like a spin-off of Nia Vardalos’s ridiculously successful 2002 My Big Fat Greek Wedding but this Italian film was inspired by a small, off-Broadway play that premiered in New York City in 2003.  It was well received, particularly within the gay community, and it inspired writer Anthony J. Wilkinson to pen two sequels – My Big Gay Italian Funeral and My Big Gay Italian Midlife Crisis.

Brought to the screen by writer-director Alessandro Genovesi, My Big Gay Italian Wedding is intended to be a sweet, simple, light-hearted farce.  It begins on a romantic note though.  Antonio (Caccamo) pulls out a silver ring from his pocket, a surprised Paolo (Esposito) is quick to say yes, and the wedding preparations can now begin.

Every character in the film has self-generated problems and instead of going for the obvious solution, they follow romantic comedy clichés and make life as difficult as possible.  For starters, Antonio hasn’t told his parents that he’s gay.  Living in Berlin has allowed him to avoid their prying eyes but the time has come for him to travel to his home town in Italy and introduce his husband-to-be.  You can sense the nerves as Antonio tip-toes around the subject during the early scenes.

He finally makes the big reveal (it’s about 30 minutes in) and the remainder of the film follows the humorous, messy aftermath.  Antonio’s father (Abatantuono) markets himself as the town’s open-minded, liberal mayor but he’s clearly not comfortable with his son’s sexuality.  Antonio’s mother (Guerritore) is much more accepting but she’s now become a semi-crazed wedding planner who has a “my way or the highway” mentality when it comes to the venue and guest list.

Two other characters have a major role to play.  The first is Camilla (Arnera), Antonio’s ex-girlfriend who can’t accept that he’s now gay and will do anything she can to win back his affections.  The second is Donato (Abbrescia), Antonio’s chatty new flatmate who is battling personal issues and cannot be left alone.  If it’s not already evident, the wedding preps will be anything but smooth!

If the audience response at my preview screening is anything to go by, My Big Gay Italian Wedding is a likeable crowd pleaser with plenty of genuine giggles.  The well-chosen cast do a great job stepping into the shoes of these self-absorbed characters and the screenplay has a nice mix of scenes that balance the craziness with the tenderness.

There are issues with the script.  Certain parts are rushed and you get a sense that not enough has been made of the material.  This is most evident during the quick-fire climax where some of the character transformations lack credibility.  Why not make the finale longer and have more fun with it?  Further, the weird, manufactured-for-laughs relationship between Antonio and his stalker ex-girlfriend hints at a darker style of comedy but feels out of place.

If you missed the chance to see it at last year’s Italian Film Festival, My Big Gay Italian Wedding is now screening in limited release across Australia.