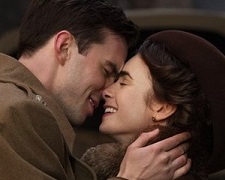 We’ve already had several interesting biopics released this year about a variety of subjects including British royalty (Mary Queen of Scots), dodgy politicians (The Front Runner), Supreme Court justices (On the Basis of Sex), Dutch painters (At Eternity’s Gate) and troubled musicians (Rocketman).  We now turn our attention to an acclaimed author.  Born in South Africa and raised in England, J. R. R. Tolkien is regarded by many as one of the great writers of the 20th Century.

It was across the 1930s and 40s that Tolkien wrote his most famous works, The Hobbit and The Lord of the Rings.  Rather than delve into that period of his life, screenwriters Stephen Beresford (Pride) and David Gleeson (Cowboys & Angels) take us back to the early 1900s and focus on his schooling years.  He attended the King Edward’s School in Birmingham before going on to study classics, English language and literature at The University of Oxford.

If you’ve read The Lord of the Rings, you’ll know that one of its strong themes is friendship.  In the first book, nine individuals from Middle-earth formed a “fellowship” with the singular goal of destroying the One Ring before it fell into the hands of the evil Sauron.  That same theme is highlighted in Tolkien… well, except without the ring which could destroy the world.

It was at high school that Tolkien met three fellow students who would become his best buddies – Geoffrey Bache Smith, Robert Q. Gibson and Christopher Wiseman.  They were an eclectic, knowledgeable bunch who shared a love for good conversation, literature and tea.  The interaction between these four characters is the soul of the movie.  Tolkien is a beautiful told tale that shows the value of strong, supportive friends and how they can shape our lives, our decisions and our personalities.

It’s unfair to single out one performance (they’re all terrific) but it’s great to see 25-year-old Anthony Boyle in his first major feature film role.  I had the chance to see Boyle’s Tony Award nominated performance (as Scorpius Malfoy) in Harry Potter and the Cursed Child when visiting New York City last July.  He’s a talented, versatile actor from Northern Ireland who seems destined for a long career.  The part comedic, part heartfelt banter he shares with star Nicholas Hoult (The Favourite) is another of the film’s worthy attributes.

The other key layer to Tolkien involves the writer’s romantic relationship with Edith Bratt (Collins), a young woman he first met at a boarding house in Birmingham.  It’s hard to depict an artist’s inner psyche on screen but Finnish director Dome Karukoski (Tom of Finland) skilly illustrates Tolkien’s fast-thinking, creative mindset during a fun sequence where he and Bratt bounce ideas off each other in a fancy restaurant.

The intermittent wartime scenes are clumsy and protracted but for the most part, Tolkien is an engaging drama.  The reflective film score from composer Thomas Newman (The Shawshank Redemption) adds to its impact.