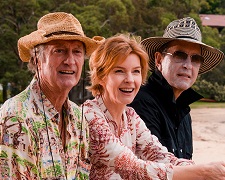 We often fawn over those with excessive wealth but if you’ve seen movies such as Citizen Kane, The Great Gatsby, Magnolia or All The Money in The World (I could have listed another 50), you’ll know that financial success doesn’t always equate to happiness.  Rich folk may have slightly different problems from the Average Joe but they’re not immune to illness, depression or anxiety (throw in a splash of paraonia).

Australian actor Bryan Brown observed this first hand when he caught up with a group of long-time friends while on holidays in the UK.  That provided the spark for Palm Beach, a drama about three couples who get together at an idyllic home in northern Sydney for a short holiday.  Brown got the ball rolling as producer, Joanna Murray-Smith penned the script, and Rachel Ward (Beautiful Kate) took the reigns as director.

The older you are, the greater the chance you’ll relate to this story.  Frank, Charlotte, Leo, Bridget, Billy and Eva have known each other for decades but they’re not quite as close as they once were.  That’s not because of anything bad or sinister.  It’s just a fact of life.  Priorities change and the responsibilities of adulthood, whether they be work or family related, take precedence.  It’s taken a significant milestone (Frank’s 60th birthday) for them to travel from across the globe and catch up together for the first time in many years.

There’s great food, great wine and great conversation.  They share details about their current lives while reflecting back on fond, vivid memories from when they were younger.  However, it’s not all hugs and happy faces.  It doesn’t take long for tensions to rise and a few deep seeded issues to bubble to the surface.  These characters know how to push each other’s buttons and they’re not afraid to do so.

A subplot involving one of the children (you’ll know what it is) feels a little manufactured but for the most part, the story and its emotions ring true.  From the delivery of the dialogue to the subtle reactions in key scenes, the experienced cast do an outstanding job of making these characters interesting and authentic.  It’s hard to single out any performance but it’s worth noting this is the first role for Richard E. Grant since his Oscar nominated performance in last year’s Can You Ever Forgive Me?  He’s terrific once again.

Using the film as an opportunity to bring more women into the Australian industry, Rachel Ward set a gender equity goal and ensured that at least 50% of the crew was female.  It’s just another reason to like this strong Australian drama.