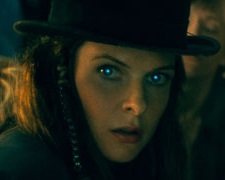 In 2007, author Stephen King watched a news story about a 2-year-old pet cat in a New England nursing home that could sense when a resident was near death and would curl up next to them in bed during their final hours.  That odd phenomenon was the spark that motivated him to write a follow up to The Shining, the widely read book that was adapted for the screen by the late Stanley Kubrick in 1980.

He was a 5-year-old in the original novel but now, Dan Torrance (McGregor) is a middle-aged man searching for solace and employment.  He’s poor, he’s dishevelled and he’s an alcoholic.  He still has his power though.  Dan has an ability, which he refers to as “the shining”, to tap into people’s minds and see through their eyes.  He’s spent a lifetime learning to control and supress the power so as not to be identified by those intent on harm.

The villains he fears are a group of strange nomads travelling across the country in a campervan.  They are led by a fearless woman (Ferguson) who has a love for meditation and top hats.  The group have discovered the secret to eternal life but in order to keep their health and youthful looks, they must capture and torture those with psychic abilities so as to “eat their screams and feed off their pain”.  The scenes in which they extract the “essence” from their victims are both cool and disturbing.

It takes a little while (the film runs for over 2 ½ hours) but Dan will have to confront the bad folk in addition to his trauma-filled childhood.  Those with key parts to play include Billy (Curtis), his new best friend who helps get him back on his feet, and Dr Dalton (Greenwood), an Alcoholics Anonymous group leader who finds Dan a job at a local hospice.  The most important character is Abra (Curran), a young girl whose psychic mind is described as being like a radio – “sometimes you pick up some weird stations.”

The horror-thriller genre is one that needs to keep reinventing itself to avoid staleness.  There’s only so many times you can use darkened basements, possessed kids and cheap jolts.  Credit to those involved with Doctor Sleep in trying to offer something different.  This is a strange but intriguing plot where not all questions have an answer.  There’s a lot to digest in the first act as audiences get to know the characters and the background of this peculiar world (it will help if you’ve seen/read The Shining).

The cast is strong.  Rebecca Ferguson is outstanding as the confident, take-no-nonsense cult leader who will stop at nothing to protect those around her.  She’s not someone you’d want to meet in real life!  Ewan McGregor is equally good as the reluctant hero trying to live a subdued, quiet life.  His character reminds me of the iconic line from Magnolia – “we may be through with the past but the past ain’t through with us.”

Adapted for the screen and directed by Mike Flanagan (Ouija: Origin of Evil), Doctor Sleep makes great use of sound.  Parts of the music score, composed by The Newton Brothers, reverberate like a slow-beating heart and this adds to the film’s ominous tone.  The same can be said of the chilling sound effects that have extra prominence given the dialogue-free nature of lengthy sequences.

Steering clear of clichés, Doctor Sleep will keep you interested and keep you thinking.