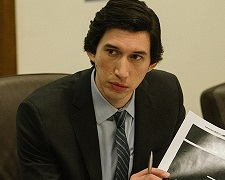 In 2009, former FBI employee Daniel J. Jones was asked to lead a Senate investigation after it became widely known that the CIA had used “enhanced interrogation” techniques (a newfound adjective for “torture”) on certain detainees in the years following the September 11 attacks.  Jones was given a small team of staff, a secure room, and access to a wealth of classified CIA emails, cables and documents.

He spent over 6 years working on the investigation and in that time, Jones and his dwindling team reviewed roughly 6.3 million pages of CIA records.  His final report was 6,700 pages in length and covered the background to the interrogation program, it’s effectiveness, details of those detained, and the knowledge and oversight (or lack thereof) of those within the CIA, Department of Justice and White House.

There’s a lot to take away from this movie.  If you’re new to the subject and haven’t seen films such as Rendition and Zero Dark Thirty, you’ll gain a deep understanding of the torture program adopted by the CIA to extract information from subjects.  It’s tough to watch as detainees are chained to walls, denied the ability to sleep, subjected to waterboarding and locked in coffins with cockroaches.  Was there any science behind it?  Did it achieve results?  The answers to those questions are provided.

The film also provides insight into the mental strain endured by investigators.  Jones (Driver) is consumed by the investigation to the point where he has unhealthy dreams and a non-existent social life.  The more CIA reports he reads, the more he realises the importance of his work.  That in itself comes with additional pressure.  Jones must ensure his report is succinct and accurate or else it could be used to destroy his reputation.

Perhaps the most intriguing layer explored in The Report is the role of government and the extent to which makes itself accountable for its own mistakes.  Some characters argue that the full report should be made public for its learnings and transparency whereas others want it supressed because of the potential reputational damage.  There’s also the question of avoiding blame and responsibility.  I’m reminded of the great line from the award-winning documentary Inside Job when an interviewee is asked why a detailed investigating has not occurred – “Because then you will find the culprits.”

I like the approach of writer-director Scott Z. Burns who avoids frivolous subplots and makes the most of the two-hour running time.  There’s no romantic love interest and there’s no moral dilemmas involving family and friends.  That may annoy some viewers who’ll tire of the political/technical speak but Burns sticks to what’s important in delivering his thought-provoking messages.

Adam Driver (BlacKkKlansman, Star Wars: The Last Jedi) continues his streak of great roles with another quality performance.  He portrays Jones as incredibly smart but also as someone who struggles to keep his emotions in check when stonewalled, rightly or wrongly, by shrewd government officials.  Annette Bening (American Beauty) is also terrific as long-running U.S. Senator Dianne Feinstein who serves as Jones’s boss and mentor.

You won’t find many other films released year that have as much to offer as The Report.