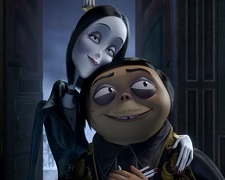 The Addams Family was created by cartoonist Charles Addams in 1938 and since that time, it’s been tailored into television shows, animated series, TV movies, feature films and Broadway musicals.  Perhaps the most well-known adaptations are the 64-episode, black and white TV show from the mid-1960s (starring John Astin and Carolyn Jones) and the two popular movies from the early 1990s (starring Anjelica Huston and Raul Julia).

With few artistic mediums left to utilise, directors Conrad Vernon and Greg Tiernan have gone with an animated feature film.  It makes it a little easier to bring these creepy-looking creatures to life and it also helps in assembling a cast who can do all their work over a couple of days in a recording booth.  Voices you’ll recognise include Oscar Isaac, Charlize Theron, Allison Janney, Bette Midler and, if you’ve got an astute ear when it comes to mumbling, Snoop Dogg.

The opening 10 minutes or so provide the background details of this iconic monster family.  After being attacked by a group of “racist” humans, they fled to an old, deserted mental asylum in New Jersey where they’ve lived for the past 13 years.  “It’s hideous, it’s horrible, it’s home” is the way they describe their well-fortified residence which comes complete with a bottomless pit and a “whine” cellar.

The parents, Gomez and Morticia, aren’t given much to do and so the film’s focus falls on their two children.  Pugsley (Wolfhard) is a bomb-creating prankster who is preparing for a coming-of-age ritual similar to a bar mitzvah.  Wednesday (Moretz) is a guillotine-loving teenager who is tired of being confined to the house and wants to see the real world.

The two kids have a role to play when, for curious reasons, the Addams Family decide to visit a nearby town and naively befriend its human population.  It’s here where they come face-to-face with Margaux Needler (Janney), the conceited host of a popular home-makeover show similar to Grand Designs.  Margaux isn’t one to embrace diversity and so, using an online Facebook-style chat group, she spreads lies about the monsters to ensure they’re not welcome.  It escalates further from there.

The Addams Family is a disappointing feature that lacks a strong, compelling narrative.  It has monsters doing/saying weird things and humans acting like huge jerks but when that’s all you’ve got for 87 minutes, the novelty quickly wears thin.  Subplots involving interesting characters (such as the demon who possesses the house) don’t get much time to breathe given the rushed, haphazard way the film moves from scene-to-scene.  Parts could have been cut (such as the introduction) to make room for more meaningful plot points.

A sequel is planned for 2021.  Hopefully it has more to offer.