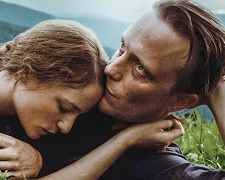 It’s becoming harder and harder to rely on positive word of mouth.  We now live in an era where films need to be heavily advertised and promoted in the lead up to their release to have any chance of financial success.  Actors charm audiences on late night talk shows, directors give lengthy interviews to writers, talent travel across the globe for red carpet premieres, and distributors erect posters and billboards wherever they can.

As polarising as his films can be, there’s something refreshing and intriguing about director Terrence Malick.  This is a guy who has won the Palm d’or at Cannes, the Golden Bear in Berlin, and twice been nominated for best director at the Academy Awards.  The list of actors he’s worked with over the past decade includes Brad Pitt, Jessica Chastain, Sean Penn, Christian Bale, Ben Affleck, Rachel McAdams, Cate Blanchett, Natalie Portman, Ryan Gosling and Michael Fassbender.  Not a bad list, right?

And yet… despite his output and his critical success… Terrence Malick is a very private man who is seldom seen in public.  He’s popped up at a small number of Q&As in recent years (as rare as a sighting of Big Foot) but he hasn’t given a face-to-face interview with a journalist in more than 40 years.  He doesn’t attend award ceremonies and he seldom appears at gala premieres (and even then he’s hiding up the back and doesn’t get on stage).  Malick is an “artist” in the sense that he puts his films into the public domain and then leaves it up to the viewer to reflect and interpret.  If you’re unsure about a particular element, don’t expect to find an explanation from him online.

While I was frustrated by his last two outings (Knight of Cups and Song to Song), A Hidden Life marks a return to the Terrence Malick that I first admired on seeing The Thin Red Line in 1998.  It comes with his trademarks – from stunning cinematography to whispering narrators.  As he’s done in the past, Malick wants to show us how beautiful and simple the world is… but then contrast that with the complexity of humanity and the issues that we create for ourselves.

The key difference this time around is that A Hidden Life has much more to offer in terms of coherent narrative.  It’s based on the true story of an Austrian farmer, Franz Jägerstätter (Diehl), who was conscripted to fight with the German Nazis during World War II.  Franz refused to pledge his allegiance to Adolf Hitler and for that, he and his family were persecuted.  To borrow the words of the town’s mayor – “you are worse than the enemy because you are a traitor.”

At its heart, this is a tale about the courage required to stand up for something when no one else agrees with you.  We see the toll this takes on his wife (Pachner) who laments “you can’t change the world… the world is stronger.”  The movie is also informative in that it looks at the conflicted role of the Catholic Church during World War II and how priests were under severe pressure from Nazis officials to “tow the party line”.  A special screening of the film was held last month at the Vatican Film Library given its themes and spiritual undertones.

The cinematography of Jörg Widmer is stunning and the violin-laden music score from composer James Newton Howard (Michael Clayton) is powerful.  Perhaps it could have used a slight trim considering the 174-minute run time (at least it’s shorter than The Irishman) but A Hidden Life is a commanding piece of cinema that lingers long after you’ve left the theatre.