Review: The Call of the Wild 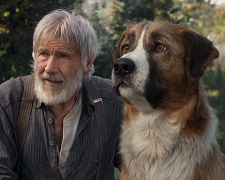 It’s always interesting to look at the way social and cultural norms have evolved over time.  Cigarette smoking peaked in the 1950s before waning in subsequent decades as its dangerous effects became broadly known.  Women were required to wear full-body swimsuits in the late 19th Century but now have the freedom to wear skimpy, colourful bikinis.  Television has been around since the late 1920s and yet the first kiss between two gay men on a primetime show in the United States didn’t occur until the year 2000.

The same applies to the way in which books, plays and musicals have been adapted for the big screen.  The Call of the Wild, first published in 1903, was a novel written by American author Jack London.  It followed Buck, a muscular St. Bernard-Scotch Collie mix, who was transferred from owner-to-owner and went on a series of adventures across the country.  It was set around the same time as London’s follow-up, White Fang (many will remember the 1991 adaptation starring Ethan Hawke).

Drawing from the source material, screenwriter Michael Green (Logan) focuses on two key subplots.  The first half of the film is centred on Buck becoming a sled dog after he is stolen from a California home and shipped off to the “edge of nowhere” in Alaska.  He gets his first taste of the “wild” and his instinctive leadership qualities kick in.  The second half revolves around his friendship with an old, forlorn gold prospector (Harrison Ford) who helps keep Buck from harm’s way.

Those who have read the novel will know it contains its fair share of violence, confrontation and sadness.  There are savage deaths (both human and animal), brutal fights and intense abuse.  There’s also a climactic battle involving a primitive Native American tribe who murder several men.  To tie back to my opening point, the studio has made the curious decision to “water down” the content for fear of scaring children (that’s my guess anyway).  It may have been okay for younger folk to read above 100 years ago but adults, rightly or wrongly, seem to be more wary and protective in today’s age.

I’m not asking for Tarantino-style gore but this movie, directed by Chris Sanders (How to Train Your Dragon), feels like a missed opportunity.  It’s an unadventurous adventure.  Instead of a gritty, emotional family drama, we’ve got something that feels too hollow and simplistic.  All the characters are black and white (they’re either really nice or really evil) and the fatalities are kept to a minimum.

Another questionable choice is the use of computer-generated animals as opposed to real ones.  Audiences are suckers for cute dogs (I am too) but it’s a little off-putting when the canine hero is clearly a special effect.  It doesn’t feel real when watching Buck walk, jump and eat.  It’s a shame because the other visual tricks (such as the beautiful backdrops) are convincing.

Given the recent acquisition of 20th Century Fox by The Walt Disney Company, The Call of the Wild marks the first movie to be released under the new 20th Century Studios banner (the “Fox” has been dropped to avoid confusion with the powerful media corporation).  It’s a fun piece of knowledge that might feature as a Trivial Pursuit question one day but unfortunately, it’s likely to be the film’s most memorable quality.