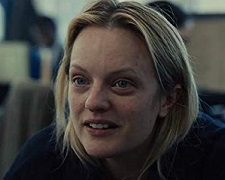 Writer-director Leigh Whannell wastes no time in ratcheting up the tension.  In the opening sequence of The Invisible Man, we follow Cecilia (Moss) as she initiates a plan to leave her abusive husband, Adrian (Jackson-Cohen).  She wakes up in the middle of the night, tip-toes around the huge house, turns off all the alarms and security cameras, and heads to the nearest road where her sister (Dyer) is waiting in a getaway car.  It’s a powerful introduction.

Over the next few weeks, Cecilia takes refuge in the house of a good friend (Hodge) and we learn why she is so frightened.  Adrian may be a wealthy renowned scientist but away from the public eye, he’s an cruel control-freak who tells her what to wear, what to look like and what to eat.  She’s finally escaped his clutches but she lives in perpetual fear that he will find where she’s hiding and come after her.

Then… out of nowhere… she is informed by Adrian’s lawyer brother (Dorman) that he has committed suicide.  As you’d expect, her reaction is a mix of shock, confusion and relief.  She’ll never have to worry about Adrian again but she’s puzzled by his out-of-character, self-inflicted demise and why he’s left her $5 million (with a few curious conditions attached) in a recently drafted will.

As the film’s title tells us (I guess it’s a semi-spoiler), not everything is what it seems in this scenario.  It appears Adrian is still alive and, given his speciality is in the field of optics, has created the ability to become invisible.  He uses his power to further terrorise Cecilia.  He’s subtle at first (ripping off her bed sheet in the middle of the night while she’s sleeping) but his deeds soon become more obvious and sinister (sending nasty emails from her computer to fracture the relationship she has with her sister).

Cecilia realises what’s going on.  The problem is she can’t convince others.  How can you provide proof of something that can’t be seen?  Elisabeth Moss (The Handmaid’s Tale) is outstandingly credible in the lead role and I’m reminded of the equally impressive performance from Claire Foy in Steven Soderbergh’s Unsane.  It’s a “one person versus the world” set-up where Cecilia, with no one else to help, must formulate a plan to outsmart her cunning adversary while keeping a grip on her fragile emotional state.  It’s not easy.

As part of the creative team behind the Saw and Insidious franchises, 42-year-old Australian Leigh Whannell knows a thing or two about making a great horror-thriller.  His goal was to modernise H.G. Wells’ famous 1897 sci-fi novel and create a film that was “unpleasant and suffocating” to watch (in a good way).  He’s achieved just that.  There are a few minor plots holes but, for the most part, The Invisible Man provides unrelenting tension from start to finish.

Those behind the camera deserves as much credit as those in front of it.  Cinematographer Stefan Duscio (Jungle) utilises creative shots (such as when the camera pans to an invisible character) to keep audiences on their toes.  Sound mixer Will Files (War for the Planet of the Apes) adds to the suspense through an effective use of sound, or lack thereof.  The visual effects and stunt teams create believable battles as Elisabeth Moss faces off against an unseen opponent.

Offering a few twists and surprises, The Invisible Man is a memorable thriller.

You can read by interview with writer-director Leigh Whannell by clicking here.