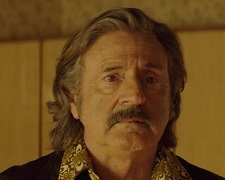 In discussing La Belle Époque, I’ve seen a few critics make the comparison with Michel Gondry’s Eternal Sunshine of the Spotless Mind (and for good reason).  The later film, my favourite of 2004, focused on a couple (Jim Carrey and Kate Winslet) who had gone through a messy break-up and then undergone a new medical procedure to wipe all memory of each other from their minds.  It was a cool concept that helped the film win an Academy Award for best original screenplay.

La Belle Époque is similarly creative.  Victor (Auteuil) and Marianne (Ardant) are a couple in their sixties who have been married for several decades.  It’s clear they’re not happy though.  Victor is depressed by how much the world has changed and how he’s seemingly been left behind.  Marianne’s been having affair and, when it all spills into the open, she kicks Victor out and settles into a new life.

There’s a new business in town where, for a substantial sum of money, a cast and crew can recreate a piece of history and you can immerse yourself in that world.  It’s like a form of time travel.  If you want to see what it felt like to be in the same room as Adolf Hitler during the middle of World War II, this company will build the set, hire actors and give you a Truman Show-type experience.  The man pulling the strings in the background is Antoine (Canet), a controlling director with a strong attention to detail.

Victor’s son (Cohen) buys his father a gift certificate and, rather than relive an iconic piece of French history, Victor chooses to go back to the day he and Marianne first met in 1974.  Based off drawings provided, Antoine skilfully recreates the La Belle Époque café in Lyon and hires a young actress (Tillier) to play Victor’s wife-to-be.  A larger cast is required including the waiters and fellow customers.

I won’t speak too much more about plot details.  La Belle Époque is a delightful French comedy that has something to say about people and the way they change over time.  There are some of us who embrace change, never look back, and are always keen to find something new.  There are others who feel tied to past and lament a time that no longer exists.  Going back to a recreated era gives Victor the chance to assess both perspectives.

There’s another interesting layer to the story centred on the company itself and what goes on behind-the-scenes.  They’re creating unforgettable experiences for wealthy customers but to pull it all off, there’s a lot of work involved and an element of tension.  Writer-director Nicolas Bedos deservedly won the César Award (the French equivalent of the Oscars) for best original screenplay and he also earned a nod for best director.

If you’re looking for something funny, charming and different, put La Belle Époque on your must-see list.