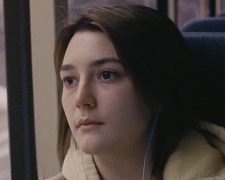 A 17-year-old girl, accompanied by her cousin, travels from Pennsylvania to New York to have an abortion.  You could use that simple description in a TV guide but I’d argue it’s impossible to surmise this film in a single sentence and do it true justice.  Never Rarely Sometimes Always is a powerful, complex, emotional drama that takes us inside the world of a scared, anxious individual.  It’s one of the best films you’ll see all year.

Writer-director Eliza Hittman (Beach Rats) chooses to use visuals to convey messaging as opposed to dialogue or narration.  We watch Autumn (Flanigan) as she goes to a medical clinic, take a pregnancy test, and learn of the positive result.  We see her dealing with a sleazy boss and struggling with morning sickness as she works as a supermarket clerk.  We observe as she sneaks away from home (not wanting her parents to know she’s pregnant) and boards a bus to New York City.

All of this creates the vibe that we’re standing in Autumn’s shoes and experiencing the same emotions.  The lack of editing and music adds to the sensation that we’re not watching a fictional tale – it feels more like a no-frills documentary shot with a basic video camera.  The lead performance from Sidney Flanigan, who had never acted prior to appearing in the movie, is incredible.  It’s easy to see why Hittman doesn’t rely on dialogue since the expressions (or lack thereof) on Flanigan’s face say more than words ever could.

It’s important for audiences to understand this is difficult to watch at times.  For example, there’s an early scene where Autumn repeatedly punches herself in the stomach in trying to induce an abortion.  There’s another lengthy sequence at a Planned Parenthood clinic in New York City where a counsellor (played by a real-life counsellor) asks a series of tough questions about her past to ensure she’s making the right decision.  It’s at this point where the film’s unusual title, a combination of 4 consecutive adverbs, is explained.

Without spoiling too much, there are parts to Autumn’s story that are not revealed (such as how she became pregnant in the first place).  I applaud the decision of Hittman to not follow convention and not spell out everything for viewers.  As I’ve alluded to above, the purpose of this film is to understand what it’s like to be a pregnant 17-year-old woman when you’ve got no money and no support network.  Background details would only be superfluous.