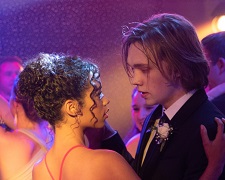 I’ve noted this before but it’s often difficult to depict mental illness in visual form.  You’re dealing with something in one’s head as opposed to that which can be physically seen.  The leading character in Words on Bathroom Walls, Adam (Plummer), is battling schizophrenia and the choice of director Thor Freudenthal (Diary of a Wimpy Kid) is to illustrate this using narration and fictitious characters.

It’s the clunkiest element of the film and that’s partly because it’s overused.  You’ll tire (or become annoyed with) the three “voices in his head” as they rely on the same routine and the same jokes from scene-to-scene.  I also wasn’t sold on the black mist and shaky camera work which arrives when Adam is about to experience a serious attack.

Despite these limitations, Words of Bathroom Walls succeeds because of the casting and its emotions.  A few early scenes are over-written (such as a moment where Adam chats to a girl alongside a pier) but the more we get to know these characters, the more we empathise.  Having suppressed his troubled mindset for so long, Adam finally opens up and has powerful heart-to-hearts with his worried mother (a sublime performance from Molly Parker), his newfound girlfriend (Russell), and a happy-go-lucky priest (Garcia).

Skilfully played by Charlie Plummer (All the Money in the World), Adam is an easy protagonist to like.  He’s in his final year of high school and trying to get good enough grades so he can follow his dream and be accepted into a leading culinary school.  Unfortunately, his schizophrenia has made it difficult to study (he’s easily distracted) and forge friendships.  With the help of his mum, Adam has seemingly tried every drug on the market but his body is “treatment resistant”.

The film is largely focused on Adam’s interactions with his mother, stepfather (Goggins) and girlfriend.  He’s concealing his true self from all of them – partly because he wants to be treated like a “normal” person and partly because he’s worried about how they’ll react if they know his inner most thoughts.  It’s also the reason why his standard defence mechanism is to push each of them away (despite needing them) when times get tough.

It’s great to see a teen-oriented drama shine the spotlight on mental illness to help destigmatize the condition.  There’s a memorable scene where Adam compares himself to a cancer-suffering child in the Make-a-Wish program.  It asks us to open our minds and think about how we perceive those with similar troubles in our own lives.  An affecting film.