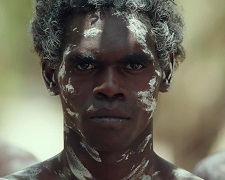 The first Australian feature film was made in 1906 (The Story of the Kelly Gang) but it took another half-century until we saw the first Aussie movie with Indigenous actors in leading roles (Jedda in 1955).  Progress since then has been slow but steady.  Over the past two decades, films such as Rabbit-Proof Fence, The Tracker, Ten Canoes, The Sapphires, Samson and Delilah, Mystery Road and The Nightingale have played their part in opening the world’s eyes to Aboriginal history, culture and stories.

High Ground is a fictional tale set in the 1920s and 30s but it’s inspired by events that took place across the era.  It begins with a group of trigger-happy white soldiers who lose their composure on a routine mission through Arnhem Land and kill a small tribe of Aboriginal men, women and children.  The aftermath is just as horrifying.  No soldiers are punished and the white authorities pretend it never happened.  This doesn’t sit well with a sniper named Travis (Baker), one of the few not involved in the massacre, who resigns from his post and takes on a new life as a crocodile hunter.

The film then pans 12 years into the future and lays out a complex scenario.  Baywarra (Mununggurr), an Aboriginal elder connected with the murdered tribe, has bide his time and now seeks vengeance. He and his “wild mob” are setting fire to farms and houses and, as expected, this has raised the ire of the arrogant police chief (Thompson) who wants Baywarra stopped at any cost.

Two unlikely people find themselves caught in the middle and trying to negotiate a truce so as to avoid further bloodshed. The first is the retired Travis who is lured back into service - partly because of his conscience and partly because his strings are being pulled like a puppet. The second is Gutjuk (Nayinggul), a 20-year-old Aboriginal man with divided loyalties given he’s been raised by a white missionary family since a small child.

The strongest selling point of High Ground is the lead performance of Jacob Junior Nayinggul in what is his first acting gig.  Director Stephen Maxwell Johnson made Nayinggul and other non-traditional Aboriginal actors feel comfortable by creating an open space with no rehearsals.  They understood the story as well as anyone and so it was simply a matter of letting them get into the moment and craft something truthful and honest.

The film isn’t as successful in balancing up its numerous subplots.  Characters played by Aaron Pedersen, Ryan Corr and Caren Pistorius feel underdeveloped and we don’t fully appreciate their perspectives and their role within the era.  The fact it’s such a chaotic narrative, where you’re never sure to whom allegiances lie, also makes it difficult to understand the reasons behind some decisions.

Making the most of its Northern Territory setting, High Ground reminds us that the Australia we know today is the result of a darker, troubled past.