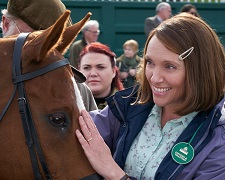 Given how much division and negativity exists in the world, there are times when a feel-good movie is just what you need to warm the heart, sooth the soul and lift the spirit.  That’s clearly the strategy behind Dream Horse, a British drama that draws from a true story and then milks it for all its worth.  So compelling is this underdog tale, it was previously the subject of a 2015 documentary that won an audience award at the Sundance Film Festival.

We begin by being introduced to Janet Vokes (Collette), a woman from a small, not-so-wealthy community in Wales who works by day as a supermarket checkout operator and by night as a bartender.  You can tell from her facial experiences that this isn’t the life she envisioned. Janet is tired of the same day-after-day routines and she’s looking for something to spice things up.

Her inspiration arrives in the form of a local accountant, Howard Davies (Lewis), who pops into the pub one night and talks about horse racing syndicates.  Janet decides to start one of her own and is able to convince an eclectic group of townsfolk, none of whom have owned a horse before, to chip in 10 pounds per week to cover the costs.  She raises the horse in a makeshift stable on her own property before transferring him into the hands of an experienced trainer to help prepare him for the track.  It’s not long until the prize money starts trickling in…

Dream Horse is so stuffed full of sentimentality that it’s almost impossible to consume.  It is as if writer Neil McKay (Mo, Appropriate Adult) is too scared to include conflict so as not to upset the audience.  When there’s a debate over the horse’s name, it’s resolved in 30 seconds.  When there’s an argument within the syndicate about whether to sell the horse, it’s quickly dispelled and everyone keeps on smiling.  When Howard’s wife validly probes his obvious gambling problem, it’s glossed over because he’s a nice guy and the horse is a success (his family even accompany him to the racetrack to help wrap up that plot point).

I’m not saying this shouldn’t be a feel-good movie.  The problem is that it’s trying a little too hard to be one.  It’s difficult to believe such a diverse group could be part of a syndicate for close to a decade and not have more issues than what is depicted in the film.  Other non-racing subplots, such as Janet’s frosty relationship with her introverted father, also feel like they’re given short shrift for similar reasons.

Despite the limitations of the screenplay, the film is still watchable thanks to the performances of the cast.  Toni Collette (Muriel’s Wedding) gives it everything as the passionate syndicate manager trying to give her life more meaning and purpose.  You’ve got to cheer for her.  The funniest scenes involve Janet and her fellow investees attending race meetings and making the most of their “owner” privileges (much to the chagrin of racing toffs).

If you’re someone who likes uncomplicated true stories and likes seeing good things happen to good people, Dream Horse should do enough to satisfy.