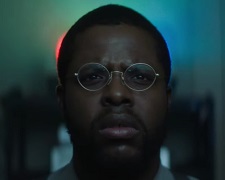 Where do you go where you die?  It’s the age-old question which has been theorised in movies including What Dreams May Come, The Lovely Bones, Coco and Soul.  Brazilian-born writer-director Edson Oda, in his feature film debut, looks at the subject from the opposite end of the spectrum - where are you before being born?

Oda has created a fascinating world that is light on detail but big on intrigue.  There are a select group of people, who have already lived on Earth and passed away, that get to choose who is born next.  Will (Duke) is one such person and the bulk of the film is spent watching him test a small group of candidates, all who appear in adult form, to decide which one is worthy for human life.  The successful applicant will be born 9 months later as a baby while the rest fade away into oblivion (a process that is as simple as it is sad).

That’s not the end of it though.  Using a wall of old televisions in his living room, Will keeps a close eye on his previously selections now living on Earth.  He takes studious notes about their activities and their mindset.  He also uses VHS tapes to record major events (e.g. one of them is about to get married) and places it on their “permanent record” in giant filing cabinets.  It’s part of Will’s self-education.  He wants to see who is happy and who is not to help shape future decisions about the types of candidates he should select.

The reason Will is currently interviewing for a “vacancy” is because a young woman he previously selected just committed suicide.  It’s left him in a state of shock and together with a close friend (Wong), he looks back over old notes and recordings to understand why she took her own life and how he missed the warning signs.  He shouldn’t dwell (there’s no big boss to scold him or ask questions) but it’s clearly something he can’t let go.

It’s a great concept but there’s a lack of tension and meaning that preventing me from fully latching on.  The applicants don’t cross paths too often and so the bulk of the film is spent on semi-repetitive one-on-one interview sessions between Will and each character.  It’s hard to work out what he’s looking for.  That said, there are some beautiful sequences where Will helps each of them create one great final memory before fading away.  Star Winston Duke (Black Panther, Us) is at his very best in these scenes.

It doesn’t quite deliver on its emotional mission but Nine Days takes chances and deserves a look.