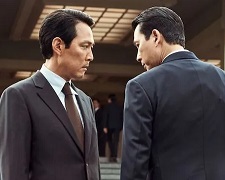 They’ve had a thriving film/TV industry for decades, but it’s not until recently that a much greater percentage of international eyes have opened to the world of South Korea.  Released in mid-2019, Bong Joon-ho’s Parasite grossed more than $263 million USD at the global box-office and became the first non-English language film to win the Academy Award for best picture.  Earlier this year, the TV show Squid Game developed a cult-like following with star Lee Jung-jae winning the Emmy for outstanding lead actor in a drama series – the first Asian man to do so.

Hunt is the latest South Korean flick to earn an international cinematic release and it’s likely to garner support based on the fact it marks the directorial debut of Squid Game star Lee Jung-jae.  The 49-year-old co-wrote the script with Jo Seung-Hee and takes on the film’s lead role (he was a busy man).  It had its world premiere out of competition at the Cannes Film Festival back in May and has become one of the top-grossing films of 2022 within its home country.

Jung-jae’s film is an ambitious thriller loosely based on actual events from the early 1980s.  A North Korean spy, referred to as “Donglim”, has infiltrated the Korean Central Intelligence Agency (KCIA).  They are leaking top-secret information about the South Korean President’s movements that could be used by the north to destabilise their southern counterparts.  High ranking agents within the KCIA have been told to find the spy or else they’ll be sacked.

There’s a lot going on here and I wasn’t sure I had a full appreciation for all the suspects and their varying agendas.  There’s a lot of people looking secretive and exchanging packages/information through secret hook-ups.  There’s a substantial body count too!  That said, even if you’re not fully up-to-speed with Korean history and politics, you can still enjoy this as an interesting thriller where agents use a variety of curious tactics to help weed out the mole.

I also liked the fact there isn’t a simple hero and villain.  There are multiple sides looking for the spy and this creates tension between the Domestic Unit and Foreign Unit within the KCIA.  No one trusts anyone… particularly within the organisation.  A few subplots were undercooked (like a young woman befriending student protestors) but for the most part, this will hold your attention for the full two hours.

Likely to increase your interest in this period of South Korean history, Hunt is worth seeing.