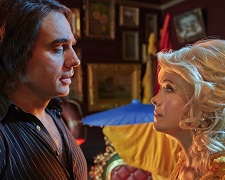 The phrase “imitation is the sincerest form of flattery” is one that’s stuck with me through life.  Who we become is often shaped by those we admire.  Some go a few steps further and, through careful mimicry, make a living from impersonating others.  Actors (if lucky) can earn big bucks and a few awards by portraying real-life people on stage and screen.  It can even reach a point over time where reality blends with artistic interpretation.  My mum grew up listening to the songs of the actual Frankie Valli whereas I was introduced to his music and his story thanks via an actor portraying him in the smash hit Broadway musical Jersey Boys.  Which “version” will permeate best with future generations?

Seriously Red is a fictitious Australian comedy-drama centred on a troop of music impersonators who travel across the country performing in front of small crowds.  There’s Elvis Presley, Kenny Rogers, Neil Diamond, and several more.  They’re no superstars but they love what they do and they seem to make enough cash to pay bills and buy costumes.  Their latest recruit is Red, a Dolly Parton devotee who has given up on her spirit-crushing bank job and found an enjoying, engaging career which offers more fulfilment.

Director Gracie Otto (The Last Impresario) and writer Krew Boylan, who also stars in the lead role of Red, have done a terrific job in exploring this intriguing world.  It’s never forcing a particular viewpoint on the audience but it asks us to think and form an opinion about these characters.  Should we look at them as failed/misguided artists who mimic others because they lack talent and can’t find their own true identity?  Or should we look at them as gifted performers who bring a little light to towns across rural Australia by allowing customers to relive iconic musical moments from yesteryear?

Boylan, in her capacity as a writer, is particularly skilled when it comes to creating interesting supporting characters.  You’ll have fun trying to get inside the head of the Kenny Rogers imitator, wonderful played by Daniel Webber (Billy the Kid), who takes on the persona 24-7.  An almost unrecognisable Rose Byrne (Damages) is similarly good as an Elvis Presley knock-off who uses it as an opportunity to explore her sexuality.  The best of the comedic material goes to Jean Kittson (Let the Blood Run Free) who steals any scene she’s involved with as Red’s loving but concerned mother.

Seriously Red is one of the best Australian movies of 2022.  It offers dark, unexpected laughs (Red’s drunken antics at a work party) which are nicely balanced against the film’s dramatic core.  When characters open up in the final act and let us see behind their facades, you’re reminded that first impressions aren’t always accurate.