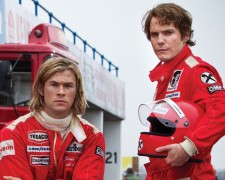 Asif Kapadia’s amazing 2011 documentary, Senna, took us inside the world of Formula One and showed us the intense rivalry in the late 1980s and early 1990s between Brazilian Ayrton Senna and Frenchman Alain Prost. These two guys hated each other but funnily enough, this hatred made them better drivers! They were more passionate and more determined in their efforts to secure the World Championship title.

That’s the thing about sport. It thrives on close contests and great rivalries. Take for example the fierce games shared between Hawthorn and Geelong over the past 5 years in the AFL. They’re two of the best clubs in the competition but more importantly, in their past 12 matches, the margin of victory has been less than 2 goals. With such tight contests, it’s not hard to explain why they’ve drawn an average crowd of more 72,000 people.

Rush tries to hook onto our love for sporting rivalries and recounts the true story of two guys who battled neck-and-neck for the 1976 Formula One World Championships – Austrian Niki Lauda (Brühl) and Englishman James Hunt (Hemsworth). These two guys were as different as chalk and cheese. Lauda was a perfectionist who went about each race in a methodical, mechanical manner. Hunt was a risk-taker who was renowned for taking chances and pulling off the impossible.

The film goes beyond the race circuit and takes us inside their personal lives. Hunt was loved by the fans for his good looks and playboy antics but behind the scenes, his team struggled to keep a lid on his womanising, his drug use and his self-absorbed personality. Lauda was a more guarded, private individual. He knew he wasn’t the public’s favourite (he’d been dubbed “the Rat” because of his bucked teeth) and so was happy to hide in the shadows while off the track.

A tricky part of any sporting movie is making it appeal to those unfamiliar with the sport. Filmmakers have a tendency to apply Hollywood’s cosmetic brush and over-simplify the material. The story is “dumbed down" using cheesy dialogue and the commentators speak as if no one has ever watched the sport before. This is part of why I loved Senna so much. With the documentary format, you hear people talk naturally and you see events as they happened. There’s nothing fake about it.

There were a few eye-rolling moments during the early stages of Rush but for the most part, the script from Peter Morgan (The Queen, Frost/Nixon) is good enough. It allows us to get inside of heads of both Hunt and Lauda. We see what drives them. We see what fears them. Most sporting flicks tend to take a side but in creating empathy towards both characters, Morgan can then ask the question of the audience – who do you want to see win? I like this approach.

The film hits its stride during the final half-hour when all the other subplots are pushed away and these guys are left to fight it out on the race track. Academy Award winning director Ron Howard (A Beautiful Mind, Apollo 13) has recreated some exciting race sequences in an array of weather conditions. These have been further enhanced by Hans Zimmer’s (Inception, Gladiator) adrenalin-pumping film score and some carefully constructed camera angles from cinematographer Anthony Dod Mantle (Slumdog Millionaire).