I’m a day late with this week’s Film Pie and to be honest, I’m surprised I have the energy to write anything at all.  The last week has been incredibly hectic at the Brisbane International Film Festival and the next week is going to be just as busy.

The opening night film was An Education and it was a really great film.  I’ll talk about it more when its released nationwide in October.  I managed to snap a photo with star Carey Mulligan on the red carpet and you can see below.  The film was well received talking to a few people afterwards.

What I enjoyed most about the night was the after party in the packed lobby of the Regent Cinemas.  As this is tipped to be the last festival at the Regent (the Birch, Carroll & Coyle lease ends in June 2010), I tried to soak up the atmosphere as much as possible.

The Regent cinemas are beautiful.  There’s the downstairs area with the quaint Aromas coffee shop.  There’s the neat little bar tucked away under the huge marble staircase.  There’s the incredibly spacious foyer and the beautiful artistry on the walls.  There’s the grand Showcase cinema.  I could go on and on.

In recent years, business has been slow for the Regent and I’ve seen many films where it’s just me and a few other strangers in a very large theatre.  It was awesome to see this grand complex packed out and everyone having a good time.  I’ve got a few photos as a keepsake and they’re up on my Facebook Film Pie group.

You can view a Youtube video at http://www.youtube.com/user/trapdoorfilms1#play/uploads/1/YjcFQwTOCjI which has been put together by the BIFF crew and does a great job capturing the night.

Since opening night last Thursday, I saw 3 films on Friday night before leaving Brisbane at 5am on Saturday morning for a golf trip with the Queensland team to Tenterfield in New South Wales.  I then saw 1 film on Sunday night, 2 films on Monday night and 2 films tonight.  I’ve got tickets to see another 6 films over the next 5 days – plus, there are 5 films out in normal release which I’m yet to see.  I think I’ll enjoy the break when it all comes to a close.

With the exception of An Education, there hasn’t been a major standout but the film I enjoyed most was 500 Days Of Summer.  It’s a romantic comedy/drama starring Joseph Gordon-Levitt and Zooey Deschanel.  It’s nothing new but it’s got style and I like these two as a couple – they’re two of my favourite young actors.  Chemistry is everything and these guys had it in my eyes.  I could easily see it again and will review it in full when released in September.

The audience vote is currently being led by Looking For Eric which I wasn’t overly fussed about.  500 Days Of Summer has the number 2 spot in the audience voting and that’s fine with me.

I’ll run through all the films I saw in next week’s issue but coming up in the next few days are Unmade Beds and Subdivision.  I’ve also had a chance to see the closing night film, Balibo, which also has my recommendation.

I had a chance to speak with the Festival’s Executive Director Anne Demy-Geroe last night and she said that ticket sales have been up and that she’s very happy with how this year’s Festival has been going great.  She didn’t want to say too much more as not to jinx it.

She was also unsure about where next year’s festival might be held if the Regent is unavailable as expected.  My personal preference would be the new Palace Barracks but I think it would struggle to cater for the Festival’s huge crowds.  It’ll be interesting to see what happens.

I’m now off to get some well earned rest.  See you at BIFF! 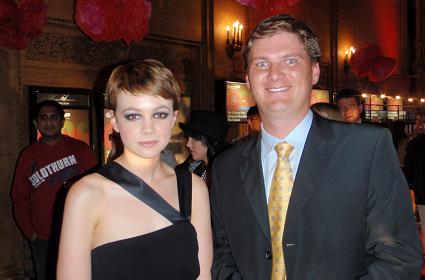