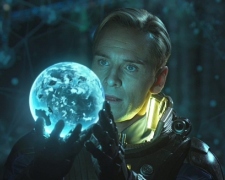 Prometheus wasn’t what I expected.  I'm confident that many others will leave the cinema with similar feelings.  This isn’t meant as a negative comment though.  I’ve always believed that the best way to see a film is to avoid trailers and know next-to-nothing about it beforehand.  It will often heighten your curiosity and reduce the risk of over-hyping.

The problem in this instance is that the film has been heavily promoted as a prequel to 1979’s Alien, also directed by Ridley Scott.  The two films inhabit the same futuristic world but the genre of this film is noticeably different.

Alien was all about thrills.  The crew of a spaceship found themselves under attack from a freaky looking creature.  I first saw it as a teenager and it scared me silly.  The film’s tagline neatly summed up the sense of hopelessness that came with the scenario – “in space, no one can hear you scream”.

Prometheus is set roughly 30 years before Alien and seems to be offering something more spiritual, more reflective.  Explorers on Earth have uncovered a series of ancient carvings that suggest that the human race was not created by God or through natural selection.  Rather, we were created by an alien race from a planet similar to our own.

Funded by a very wealthy businessman, a small team of explorers are travelling on the space ship Prometheus and are going in search of a faraway planet.  A few are there for the money (it’s a highly paid job) but most are driven by pure curiosity.  They want to know if their theory is true and if so, who created life on Earth and for what purpose?

I feel like I should say too much more because Prometheus is a film that relies heavily on suspense.  It’s the not the “jump out of your seat” kind of suspense.  It’s more one of mystery and intrigue as to try to work out where the story is heading next.

It’s a bold project from Ridley Scott (Gladiator, Black Hawk Down).  I saw this film with a friend (who loved it) and it provided much post-film discussion.  This fact alone elevates it above a run-of-the-mill science fiction flick that relies heavily on battle sequences and special effects.  Instead of offering nothing but action, action and more action, Prometheus tries to put forward a thought-provoking theory about our evolution.

The key word in my previous sentence is “tries”.  It’s a gutsy effort but the screenplay from Jon Spaihts and Damon Lindelof isn’t strong enough.  I was struggling with the characters from the very beginning.  To put it simply – they’re a bunch of over-emotive half-wits and I don’t know how they were selected for the mission.  They make such dumb mistakes and whilst I realise these mistakes help create the film’s drama (yeah, I know, it’s only a movie), I wanted something smarter.  The final half-hour is particularly silly.

As an example, if you’ve got an object rolling towards you, why do you keep running in a straight line?  Why don’t you simply move to the side and out of its path???  Don’t even get me started on the love making or the do-it-yourself surgery.

Michael Fassbender (Shame) delivers the film’s best performance as a strange, life-like robot that is trying to keep the crew focused on the task at hand.  He may speak with the same monotone voice but he finds a way to make his character rather unsettling.  I was less impressed with the other two big names.  Charlize Theron (Young Adult) spends too much time in the background and Noomi Rapace (The Girl With The Dragon Tattoo) irritated me with her simplicity.  It’s probably unfair to make this reference (since they are very different films) but I much preferred Sigourney Weaver in Alien – she’s a much stronger, more charismatic female heroine.

The door is open to a sequel with many questions left unanswered as the credits start to roll.  I’m curious to know where this series will head next.  It has my attention but there’s room for improvement.