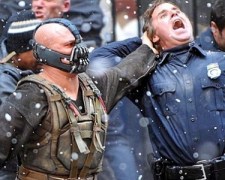 The Dark Knight Rises comes with an almost unprecedented level of hype and expectation. The last film in the series grossed more than $1 billion at the international box-office and won an Oscar for the late Heath Ledger. Further solidifying his reputation as one of Hollywood’s best’s directors, Christopher Nolan followed up with the equally successful Inception – the best movie of the last three years (in my eyes anyway).

This final instalment in Nolan’s trilogy picks up the story exactly eight years after the conclusion of The Dark Knight. A small get-together is being held to honour the memory of district attorney Harvey Dent. Dent is remembered fondly by the citizens of Gotham City for the way in which he ruthlessly prosecuted the “bad guys” and kept them off the streets.

Only Bruce Wayne aka Batman (Bale) and Police Commissioner Gordon (Oldman) know the truth. Harvey Dent wasn’t a martyr. After being badly disfigured in an explosion, Dent had gone on a murderous rampage before Batman was finally able to stop him.

It was Batman who took the fall though. He realised that if the public knew the truth about Dent, it would destroy their faith in the officials and police officers who help maintain law and order. Batman sacrificed his reputation and is now seen as a villain – the man who killed the heroic Harvey Dent.

Depressed by the whole experience, Bruce Wayne hung up his Batman costume and has now lives the life of a recluse. He hobbles around his mansion using a cane, takes little interest in his multi-billion dollar company and no longer makes any public appearances. Not even his loyal butler (Caine) can convince Bruce to put the past behind him and start a new life.

Ah, but as the saying goes – every hero need a villain. It takes the arrival of a new evil mastermind to lure Batman back into the spotlight. A terrorist by the name of Bane (Hardy) has recruited a small army (not sure how) and has crafted a ridiculously intricate plan (not sure why) to destroy Gotham City. He is being assisted by the alluring Selina Kyle (Hathaway), a seductive cat burglar who can seemingly get her hands on anything.

It has received glowing reviews thus far but I was only mildly impressed with The Dark Knight Rises. One of the strengths of the earlier films was the way in which they explored the fine line between good and evil and the difficult choices we sometimes must make. I’ll never forget the prophetic line uttered by Harvey Dent – “you either die a hero or you live long enough to see yourself become the villain”.

These thought-provoking concepts haven’t come through as strongly in The Dark Knight Rises. In terms of the villain, Bane’s motivation is to “liberate” the residents of Gotham City from the shackles of its overbearing government and police force. It’s an interesting concept (with relevance in today’s society) but it isn’t explored in much detail. We never really understand why so many are motivated to stand behind him.

It left me with the disappointing realisation that this story is too “black and white”. The closest we get to something more substantial is a heartfelt exchange between Christian Bale and Michael Caine midway through the film. It’s a shame there wasn’t more of this.

Instead, we’re left with action-packed scenarios, filled with plot holes, where people always seems to be the right place at the right time. This significant weakness gives the film an over-the-top “cartoonish” feel and detracts from what could have been a hugely suspenseful finale to the trilogy.

To its credit, the film offers a few nice surprises. Some of the twists create a connection with characters in past Batman films. Others leave the door open to future franchises. It’s also great to see the introduction of new, intriguing characters. The feisty Anne Hathaway (The Devil Wears Prada) is a breath of fresh air as Selina Kyle. The likeable Joseph Gordon-Levitt (500 Days Of Summer) makes an impression as a budding police officer (although he should probably be a clairvoyant).

As one of the best action directors in the business, Christopher Nolan has again created a series of fast-paced action sequences that will get the blood pumping. Despite the limitations within the screenplay, this film is still exciting to watch! Nolan pulls you into this fictitious world and you won’t even notice the visual effects – it all feels so real. The thunderous sound effects (it felt like my seat was vibrating at times) and bold film score from Hans Zimmer further add to the experience.

The Dark Knight Rises has a convoluted plot and struggles to justify its key themes but it’s still worth a look as an epic action flick. I’d be careful not to set your expectations too high.