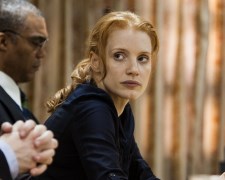 Put simply, Zero Dark Thirty recounts the events that led to the capture of al-Qaeda leader Osama bin Laden.  We begin in September 2001 and hear telephone calls from those trapped atop the burning World Trade Centre towers and pleading for help.  Two and a half hour later, we finish with a group of elite Special Forces operatives storming bin Laden’s compound in Abbottabad, Pakistan and killing him.

Given it is one of this year’s awards season contenders, Zero Dark Thirty has been subjected to a huge degree of scrutiny by journalists and some members of the public.  No one would blink an eyelid if this were a direct-to-TV movie or an episode of CSI: Crime Scene Investigation.  They’d realise Hollywood’s cosmetic brush had been applied (thankfully not as much as in Argo) and go along with it.

That’s not the case here.  This latest collaboration from director Kathryn Bigelow and writer Mark Boal (The Hurt Locker) is engaging, persuasive and believable.  It’s as if you’re standing in the same room as these characters and watching them go about their day-to-day lives.  The bottom line is that it feels real, almost documentary-like in style.

This has worried some.  The Acting Director of the CIA recently made a public statement reminding audiences that “the film takes significant artistic license, while portraying itself as being historically accurate.”  I can’t remember the CIA ever having issued such a statement before!  A few United States senators have also voiced their concerns and criticism.

The biggest talking point has been around the subject of torture.  In the early scenes, we see CIA agents using torture to extract information from an al-Qaeda detainee.  The most extreme technique depicted is that of waterboarding – continually pouring water over the face of an immobilised person to create the sensation of drowning.  It ultimately leads to the detainee revealing the name of bin Laden’s most trusted courier.

I have read numerous articles proclaiming that the film is either pro-torture or anti-torture.  For me, this is proof that the script of Mark Boal has been effective.  Boal hasn’t taken a one-sided viewpoint on this highly provocative issue.  What he’s done is generate a much-needed debate.  Even if you don’t believe the film portrays events as they happen, you’d be naive to think that (1) the U.S. didn’t torture anyone and (2) they didn’t gain any valuable information through such techniques.

Many people were involved in capturing Osama bin Laden but given the natural time constraints of a movie, Zero Dark Thirty focuses on just one – a CIA agent known as Maya.  Bigelow has acknowledged the character is based on a real person but she’s still working for the CIA today and so her true identity has been hidden.  Not even Jessica Chastain (The Help) had the chance to meet her.

It’s a brilliant performance from Chastain who portrays Maya as a woman who is smart, passionate and level-headed.  She’s not a “super hero” though.  She has doubts and insecurities just like anyone else.  Two years ago, I’d never heard of Chastain.  Now, I consider her one of the best actresses working in Hollywood today.  She’s guaranteed to earn a second consecutive Academy Award nomination (after The Help last year) and she’s a strong chance to be holding the famed 13½ inch statue in her hands on Oscar night.

Boal’s screenplay and Chastain’s performance reminded me of the tagline from the terrific David Fincher film Zodiac – “there’s more than one way to lose your life to a killer”.  Most of us go to work each day and we come home with some sort of accomplishment – we’ve met a sales target or we’ve finished a set number of jobs or reports.

Maya has devoted her life to just one task – finding Osama bin Laden.  She goes to sleep each night not knowing if she is any closer to completing that task.  Coupled with the increasing pressure from the public, the government and her superiors, you get a clear sense of the role’s heavy emotional burden.  With the film spread across a full decade, we see many instances where the agents struggle to maintain their cool temperament.  There’s a particularly strong moment when a CIA official (Mark Strong) grills his team about their failure to get results.

We all know this story ends but Zero Dark Thirty’s finale is still gripping and action-packed.  Watching the Special Forces guys navigate their way through bin Laden’s hideaway, working to a strict timeline, highlighted the perilous nature of the operation.  The fact that the Pakistan military hadn’t been informed also contributed to the difficulty.

With a few memorable one-liners (love Chastain’s quote about 95% certainty) and its eye-opening look inside the CIA and the hunt for Osama bin Laden, Zero Dark Thirty is what I consider to be great cinema.