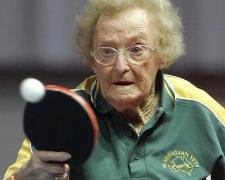 We haven’t seen a lot of documentaries released in Brisbane cinemas this year. By my count, Ping Pong is just the 4th. It’s a peculiar choice in the sense that it hasn’t come with much fanfare. It has won no major awards of note and has an Internet Movie Database score of just 6.7 out of 10 (not particularly flash).

Perhaps they’re trying to cater for those, myself included, who have short attention spans. Ping Pong clocks in at just 76 minutes. I can’t think of another release over the past year with such a low running time.

Getting to the film itself… Ping Pong is a straight forward, no frills documentary that follows a group of table tennis players in the lead up the 2010 World Championships in China. So what’s so special about these particular players? The answer is their age. This is a special event for those who have reached the ripe old age of 80. In fact, there’s a player from Australia (Dorothy De Low) who recently celebrated her 100th birthday! That’s pretty damn cool.

It’s interesting to hear their perspectives on the value of table tennis. First and foremost, it’s provided them with a way of staying active. There’s one competitor who entered a nursing home in 1997 and yet now, at the age of 89, is entering the world championships for the first time. It’s also funny to see how competitive they still are. There’s one lady who seems to be on an obsessive quest to add to her expansive gold medal collection back home.

It’s a curious subject matter but I had the feeling that more could have been achieved by director Hugh Hartford. We rush through the table tennis scenes and they don’t generate much excitement. We don’t even get to see the scores – we just know if the player has won based on the final point. It’s nice to delve into the background of these competitors but the film also veers off on some strange tangents. Why did we need to be shown a room in a nursing home where dead bodies are stored?

Table tennis isn’t a huge sport in this country but if Ping Pong inspires a few older folk to get busy and get into the game… that can only be a good thing.