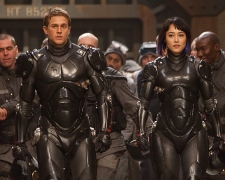 In a blockbuster season dominated by superheroes and sequels, it’s nice to be able to sink our teeth into something new.  Further, I’d strongly argue that Pacific Rim is one of the more memorable, distinctive action releases in recent years.

The concept alone is cool – robots versus monsters!  Don’t worry though.  This isn’t a B-grade horror spoof in the same vein as Mega Shark v. Giant Octopus).  Pacific Rim is far more advanced with a great deal of thought going into the design of the creatures and the choreography of the fight sequences.

After a brief introduction and a late opening title scene, we find the crux of the story is set in the year 2020.  A giant cavity as opened up on a sea floor in the Pacific Ocean and from it, a never ending series of dinosaur-like creatures have emerged.  They are known as Kaiju (a Japanese word for “strange beast”) and their intent is clear – to kill humans and cause wide-scale destruction.

Through a conglomeration of the world’s wealthiest governments, a military program has been enacted to combat this powerful enemy.  They aren’t using missiles or nuclear weapons.  Rather, they’ve created a group of enormous robots referred to as Jaegers (a German word for “hunter”).  Two humans stand inside the robots head and together, they can control all of its body movements.

It sounds like a page out of Transformers but through my eyes, the “awesome” factor is considerably higher.  The robots and monsters share some epic battles highlighted by a fight through the neon lit streets of Hong Kong (about two-thirds of the way through the movie).  It’s hard not to be energised by the stunning visuals and the stuck-in-your-head film score from Ramin Djawadi (Iron Man, Game Of Thrones).

It’s evident that Mexican-born director Guillermo del Toro (Pan’s Labyrinth) wants the robots to take “centre stage” in Pacific Rim.  He could have gone with a few Hollywood stars and maximised their screen time but instead, he’s gone with some lesser names – most of whom are better known for their television work.

Charlie Hunnam (Sons Of Anarchy) plays a robot pilot still coming to grips with the death of his brother five years ago.  Idris Elba (The Wire) is a commanding officer doing everything in his power to save the human race.  Charlie Day (It’s Always Sunny In Philadelphia) comes in for comic relief as a crazy scientist with a death wish.  There’s also Academy Award nominee Rinko Kikuchi (Babel) and an amusing cameo from long-time del Toro collaborator Ron Perlman (Hellboy) – make sure you stick around through the closing credits to see all of his performance.

The dialogue is tacky, the characters are clichéd and the accents are laughably over-the-top.  When you also think about the messy screenplay (a lot is unexplained), you wouldn’t be alone in asking – how is this film any good?  I’d answer by saying that Pacific Rim is very self-aware of its cheesy nature.  Instead of trying to be a dark, serious piece, it’s tapping into the fun, old-school action films from yesteryear.  If you go in expecting to have a good time… you will.