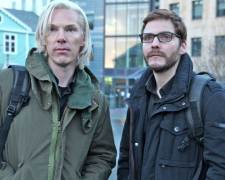 Four months ago, We Steal Secrets: The Story Of Wikileaks was released in Australian cinemas. It was an insightful, balanced documentary from Academy Award winning filmmaker Alex Gibney (Enron: The Smartest Guys In The Room) and featured a surprisingly large amount of behind-the-scenes footage to help us form an opinion on Julian Assange and Wikileaks.

Maybe it’s bad timing… maybe it’s just a bad film… but I struggled with The Fifth Estate. This dramatic retelling of Assange’s rise to fame covers almost the same material as Gibney did with We Steal Secrets. We learn a little about his background, we understand why he created Wikileaks, and we see him bring the U.S. Government to its knees with the release of classified documents.

If given a choice, I’d much rather go with the documentary over this re-enactment. While a documentary filmmaker still has the power to guide or perhaps mislead the audience by only showing select footage, at least you know that you’re watching the real thing and you’re hearing from the real people. It’s the ideal way of approaching a polarising subject matter like this. It adds an important layer of credibility and makes it a lot harder for critics to attack.

That’s not to say that director Bill Condon (Dreamgirls, Gods & Monsters) hasn’t tried. This film, based on novels written by David Leigh, Luke Harding and Daniel Domscheit-Berg (Assange’s former right-hand man), is trying to offer an impartial point of view. Some will see Assange has an agent of change trying to bring power to the people. Others will see him as a selfish individual driven almost entirely by his own ego.

Benedict Cumberbatch (Star Trek Into Darkness) also deserves praise for his performance. I can’t think of another film this year where an actor embodied the role so perfectly. His voice, his accent, his look, his facial expressions – they’re all remarkably similar to the real Julian Assange. It’s actually kind of spooky – particularly during a re-enacted interview that serves as the final scene in the film.

Those unfamiliar with Assange and those who didn’t see the documentary will probably find this much more informative. It’s clear they’re the target audience. Those with more knowledge of the subject matter are likely to be bored. There’s nothing in The Fifth Estate that will challenge opinions or give a fresh perspective on Assange and Wikileaks. That’s how I felt anyway.