Review: Deliver Us From Evil 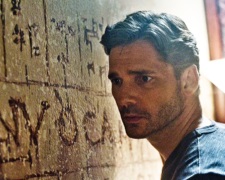 I was chatting to a friend last week about No – the 2012 releasing starring Gael Garcia Bernal.  It told the story of a young advertising guru working in Chile who came up with a creative opposition campaign to defeat President Augusto Pinochet in the 1988 referendum.  It highlighted something that I love about cinema – it can provide insight into a person and a piece of history that would otherwise have known nothing about… if not for the movie.

You therefore imagine my disappointment when I saw this week’s crop of new release movies.  Mrs. Brown’s Boys D’Movie is based on a UK television sitcom that has been running for three seasons.  Hercules is the second film based on the Greek hero to be released this year (one starring Kellan Lutz, the other starring Dwayne Johnson).  Deliver Us From Evil is the umpteenth film about demons and exorcisms.  It’s even from a director, Scott Derrickson, who has made an exorcism film before!  I’m referring to 2005’s The Exorcism Of Emily Rose.

To think that there are so many amazing stories in the world waiting to be told… and yet we seem to fall back on the same stuff again and again.  I guess I should be grateful there wasn’t a new vampire flick out this week.

Before this degenerates into too much of a “rant”, I should focus my attention on the film at hand.  Deliver Us From Evil stars Eric Bana as Ralph Sarchie – a New York police detective who seems to have an uncanny “radar” for picking interesting cases.  It’s never boring working with Sarchie (his partner knows this all too well) but you’re unlikely to get much sleep either.  He works throughout the night and is keen to sink his teeth into any new investigation.

Sarchie’s latest case is a strange one.  A mother turned up at a zoo, threw her 2-year-old child into a lion’s enclosure, and then started talking gibberish.  Maybe she’s speaking Latin.  Maybe she’s just crazy.  Whatever the reason, she’s locked up in a mental institution until things can be figured out.

The arrival of an unorthodox priest (Ramirez) sheds a little more light on the situation.  He tries to explain to Sarchie that there are two kinds of evil in the world – secondary evil which is committed by man and primary evil which is “something else entirely”.  The priest believes that the mother has been possessed by a powerful demon and that this case is anything but solved.

This is a familiar, no frills exorcism film that doesn’t offer much in the way of scares or surprises.  We get the standard early scenes with Sarchie expressing his scepticism and saying that he doesn’t believe in “invisible fairies” – despite the fact that the situation couldn’t look any stranger!  There’s also a seen-it-all-before subplot involving Sarchie’s wife (Munn) who is frustrated that her husband is spending too much time at work and not enough at home with their young daughter.

It may sound hard to believe but this is based on actual events.  Ralph Sarchie is a real person and he penned the 2001 non-fiction book, Beware The Night, which formed the basis for the screenplay.  I’m not discrediting Sarchie’s work as a “demonologist” but when you see some of the stuff in this movie, you’ll be wondering just how closely it mirrors the truth.