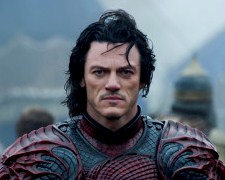 I’m really not sure we needed another vampire movie.  It’s a genre that’s been well covered over the past decade with films including Vampire Academy, Only Lovers Left Alive, Abraham Lincoln: Vampire Hunter, Dark Shadows, Let Me In, Daybreakers and 30 Days Of Night.  There’s also a bunch of popular franchises including Night Watch, Underworld and Twilight.  We’ve even reached the point where spoofs are being created – check out Vampires Suck and What We Do In The Shadows as examples.

Anyway, first-time writers Matt Sazama and Burk Sharpless have tried to come up with their own fresh take on the genre. Dracula Untold is an origin story which shows us how a 15th Century Transylvanian prince was transformed into one of the world’s most infamous vampires.  Don’t expect it to be wrapped up too neatly.  Several plots have been left open for possible sequels (provided this film makes a profit).

The film opens by introducing us to popular prince known to most as Vlad the Impaler (Evans).  It’s a nickname well earned.  During war time, impaling his victims on giant spears was his favourite form of execution.  Vlad may be a powerful warrior but he’s no match for a domineering Sultan (Cooper) who controls the kingdom with a 100,000-man army.  The Sultan’s latest demand is that that Vlad hand over 1,000 children, including his own son, so that they can be trained and added to his growing militia.

It’s the last straw for Vlad.  As the saying goes – desperate men do desperate things.  He heads into the mountains and tracks down a vampire named Caligula (Dance) who many believed to be a legend.  Vlad asks to be transformed into a blood sucking creature so that he will have the power to defeat the Sultan’s army and hence, protect his family.  Caligula provides a sinister warning – “what kind of man crawls into his own grave in search of hope?”

Oh, but there exists a fairy tale type loophole.  Vlad will only be transformed into a vampire for 3 days.  That’ll be just enough time to slay the Sultan.  After that, he will return to his life as a mortal human and live happily ever after (or so I assumed).  However, if he drinks the blood of a human inside of those 3 days, he will remain a vampire for all eternity.  The bottom line – don’t drink any blood or you’re screwed.

I realise it’s a fantasy flick but I still had trouble going along with several parts to the story.  If Caligula is so unsatisfied with his life (you’ll see what I mean), why doesn’t he just walk out into the sunlight and kill himself?  As for Vlad, why does he wait for the Sultan’s army to come to him?  Shouldn’t he go straight after them to save time?

There are a few noteworthy elements (I like the idea that Dracula is a bit of a family man) but the film generally plays out like a standard action flick.  For example, Vlad can kill 1,000 men by himself in a matter of minutes… and yet he has to “lower himself” to a choreographed sword fight during the film’s finale.  We’ve seen it before.  We’ll see it again.

The cast do their job.  Luke Evans (Fast & Furious 6) does his best to look as aggrieved and tortured as possible.  Sarah Gordon (Cosmopolis) does what most females did in the 15th Century – playing second fiddle to their husband.  It’s Charlies Dance (Game Of Thrones) who leaves the biggest impression as the cunning Caligula.  He’s far more interesting than the film’s keynote villain, played by Dominic Cooper (Need For Speed).

First-time feature director Gary Shore is to be applauded for the film’s brisk pace (it clocks in at a tidy 92 minutes) and some impressive visuals (such as the way in which the vampires react when coming into contact with sunlight or silver) but if you’ve grown tired of the vampire genre, it’s hard to see this tale providing much in the way of reinvigoration.