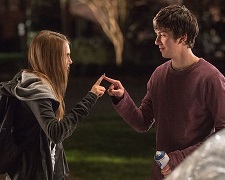 For most of his life, 17-year-old Quentin “Q” Jacobsen (Wolff) has had a crush on the girl next door, Margo Speilgelman (Delevingne).  They were childhood friends but drifted apart during high school.  They’ve hardly said a word to each other in more than a year.  Margo is living her life – complete with a boyfriend and a sense of adventure.  Q is the opposite.  He studies hard and gets good grades… but his life is incomplete because he doesn’t have the “miracle” that is Margo by his side.

Their worlds reconnect in ridiculous circumstances.  Margo climbs through Q’s window late one night and asks for a favour.  She needs Q to help drive her around the city so that she can get revenge against a series of people who have wronged her.  Top of the list is her now “ex” boyfriend who has been sleeping with one of her close friends.

Suffice to say Margo isn’t the forgiving kind.  She turns up at her friends place and an elaborate plan goes perfectly, she ends up taking a photo of her ex-boyfriend as he runs naked across the lawn.  There’ll be no ramifications through.  It turns out he has an incredibly small penis and Margo (through Q) threatens to tell everyone (using the photographic evidence) if he badmouths her.  That’s classy.

It gets better.  It turns out another of Margo’s teenage friends knew she was being cheated on but didn’t say a word.  To get revenge on him, she breaks into his house, goes into his bedroom while sleeping, and waxes one of his eyebrows.  It would provide a great scenario to use in a criminal law exam.  As for Q, he is somewhat freaked out by the whole escapade but he goes along with it because (1) he loves Margo, and (2) she tells him that he needs to break out of his shell.

The next morning, Q wakes up and thinks his world is now peachy.  He and Margo are best buddies again.  Wrong.  She doesn’t turn up at school and after a few days, she is reported missing.  Her “deadbeat” parents aren’t too concerned.  They tell the cops that Margo runs away all the time as a means of getting attention.

The only person who concerned about her whereabouts seems to be Q.  He enlists his two best friends, Ben (Abrams) and Radar (Smith), and they start going through Margo’s belongings in search of answers.  Their efforts put  Sherlock Holmes and Miss Marple to shame.  They piece together some ridiculously obscure clues and set off on a road trip to find her.  Oh, and they have to make sure they get back in time for their high school prom (a more important priority).

The overwhelming message that is shoved down the audience’s throat throughout the film is to get out there and take a few chances in life.  It’s a nice message but the execution is poor.  Some of the material in this film is quite serious (criminal acts, uncaring parents) but the screenplay shrugs it off as something minor.  Other moments don’t make much sense.  There’s a bizarre scene where they stop at a petrol station and rush through their purchases to save a few minutes.  When you’re travelling more than 3,000 miles, there are plenty of better ways to make up that time.

I’d also argue that these characters are shallow and moronic.  They spend an inordinate amount of time yammering about the prom.  Despite the fact they’re looking for a missing person, they have to make sure they get back for their pre-prom haircuts.  Radar talks about how it’s going to be the first time he and his girlfriend will have sex.  Ben is trying every move he has (and they’re not very good ones) just to find a date to go with.  Q is perhaps the biggest bore.  There’s a scene near the end where he has a quasi-meltdown about Margo.  I reiterate that this is a girl who has ignored him for years.

If Paper Towns is representative of the youth of today, our species is truly doomed.