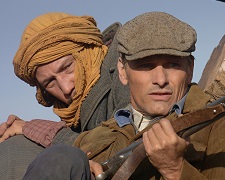 I have a city dwelling friend who has considered giving up his lifestyle and moving to an isolated part of the country.  He’d get a decent sized property with a dog and a few farm animals.  He could sit on his porch, read a good book, drink a glass of scotch, and just relax.  It may sound incredibly boring but his motivation is simple.  He’s tired of the depressing news on television and the negativity on social media.  He’d rather escape it all and live a peaceful, albeit solitary, life.

I’m not sure that’d work for me… but it’s the decision made by Daru (Mortensen) – the lead character in Far From Men.  Set in Algeria 1954, the country is on the brink of war.  A socialist political party is pushing for independence from France.  They’ve pulled together a well-armed militia group and have called upon Muslims in Algeria to fight for the “restoration of the Algerian state.”  The body count is already rising.

Daru wants nothing to do with the conflict.  Born in Algeria of Spanish parents, he doesn’t want to have to pick a side.  He has shut himself off from the world in a small, rundown home in the middle of nowhere.  It comes with an adjoining classroom that he uses to teach young kids from local villages.  Daru believes in the value of a good education and he wants to make sure these children, all from poor families, get a positive start in life.

Unfortunately, Daru can no longer avoid the increasing unrest.  An old acquaintance turns up at his doorstep and is accompanied by a dishevelled man with hands bound.  The prisoner’s name is Mohamed and he has admitted to killing his cousin after a property dispute.  Daru has been asked to escort Mohamed on a lengthy trek to the town of Tinguit so that he can be tried and executed.

Based on the short story by Nobel Prize winning author Albert Camus, Far From Men astutely highlights that no matter how hard we try, we cannot avoid the tough choices that fate throws our way.  Mohammed appears to have made his choice.  He killed a man and is now ready to accept his punishment.  If he tries to escape, his immediate family will be targeted and persecuted.  He understands that he must die so as to protect those he loves.

Daru is still undecided about his choice.  As the two get to know each other, he realises that Mohammed is an honest, warm-hearted man.  Could he live with himself if he takes Mohammed to Tinguit for a sham trial and execution?  What’s the alternative though?  If he doesn’t go through the request, the authorities will be alerted and it’s likely his own life will be in danger.  How does one react when faced with a “lose-lose” situation?

Far From Men could be described as patient (in a good way) or slow (in a bad way).  It will all depend on your mood and appetite.  The idea of a subtitled movie that follows two guys walking across a barren Albanian landscape won’t appeal to everyone.  It’s not exactly “action packed”.  Those interested in the subject matter will take much more away from it.  While it’s a little sleepy in places, writer-director David Oelhoffen has done a great job fleshing out the important themes in Camus’ story.

Selected as part of the official competition at the 2014 Venice Film Festival, Far From Men is a heavy drama with much relevance in today’s society.