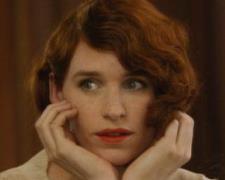 Set in the late 1920s, there’s a moment early in The Danish Girl where Gerda (Vikander) needs help while painting an important portrait.  Her female subject isn’t available to come into the studio and so she asks her husband, Einar (Redmayne), to stand in her place.  She slips stockings on his legs and gets him to wear a beautiful ball gown.  When Gerda’s friend (Heard) unexpectedly drops by and sees Einar in the gown, they all joke and laugh about the unusual situation

It’s an important scene in the film as it’s designed to show that Einar is having doubts about his gender.  He rubs his hands along the dress and you can tell he is enjoying the situation.  Gerda innocently thinks this is part of her husband’s “kinky” side and encourages his behaviour.  He wears a chemise as part of some bedroom roleplay.  He puts on a red wig and accompanies her to a charity ball as her fictitious cousin, Lili.  It’s all intended to be a little bit of fun.

The obvious disconnect in the mindset of Einar and Gerda soon comes to the surface and the film develops into a more serious drama.  Gerda becomes the more interesting character.  She’s a liberal thinker who wants to be supportive of Einar’s choices but knows this could come at a great personal cost.  If he were to become a woman, their reputation within the conservative community would suffer and work would be difficult to find.  More importantly, she would lose the husband she has loved for many years.

That’s not to say that Einar isn’t struggling.  He harnesses the courage to speak to several psychiatrists but they look at him with distain and want to see him institutionalised.  He develops a close friendship with another man (Whishaw) but is unsure about the new feelings that come with it.  Einar seems most comfortable when he’s alone.  Highlighted by a sequence where he tries on dresses at the local playhouse, Einar can be himself without fear of judgement.

This “based on actual events” tale is close to a century old but is still of relevance today.  The media circus that has enveloped Caitlyn Jenner shows that many are still confused and/or unaccepting of transgender people.  It’s a subject that isn’t often explored in mainstream cinema and so hopefully this film makes, at the very least, a small difference.

Some criticism has been levied on director Tom Hooper (The King’s Speech, Les Misérables) for not casting a transgender actor in the lead role.  He admits that he considered men, women and trans actors before settling on recent Oscar winner Eddie Redmayne (The Theory Of Everything).  He was drawn to Redmayne because of his talent and his “relationship to his feminine side”.  Redmayne played a woman in his first professional acting role – a stage adaptation of Shakespeare’s Twelfth Night in 2002 (directed by Mark Rylance from Bridge of Spies).

It’s tough to illustrate the “inner anguish” of their respective characters on screen but Redmayne and co-star Alicia Vikander (Ex Machina) do their best by using a lot of tears and a lot of blubbering.  It’s hard not to feel empathy for their situation.  Matthias Schoenaerts (Far From The Madding Crowd) makes less of an impact as an influential art dealer offering support.

Featuring exquisite production design and a score from composer Alexandre Desplat (The Grand Budapest Hotel), The Danish Girl is a story worth telling.

You can read/listen to my chat with director Tom Hooper by clicking here.