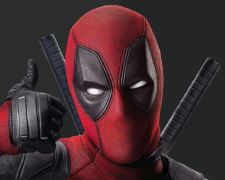 What do I look for in a good movie?  My usual answer is creativity and originality.  As a fan of superhero flicks, I’m the first to admit they’ve been feeling a little tired over the past few years.  They’ve been following the same formulas and have been drumming over the same themes (“absolute power corrupts absolutely”).

The timing is perfect because Deadpool has come along like a breath of fresh air.  It’s unlike anything we’ve seen from the Marvel franchise before.  Ryan Reynolds stars as Wade Wilson – an intimidating mercenary for hire.  His talents are illustrated in an early scene where he is hired by a young woman to stop a bothersome stalker.

Wade expects to live and long and fruitful life but that changes after being diagnosed with terminal cancer.  Out of desperation, he undergoes a radical mutation therapy that has unintended side effects.  On the positive side, the cancer is gone and he has super-healing powers.  He is almost impossible to kill and has taken on the new name of Deadpool.  On the negative side, his face is badly disfigured.  He now wears a mask and has distanced himself from his loving girlfriend, Vanessa (Baccarin).

He’s a terrific fighter but above all else, Deadpool has mastered the insult.  It doesn’t matter whether you’re his friend or his enemy.  He’s going to be sending a few barbs your way.  It’s rude, it’s crude, and it’s politically incorrect.  I said the same about the awful Dirty Grandpa but this film is exceedingly better because the story is better and the wit is sharper.  Writers Paul Wernick and Rhett Reese deserve praise for creating such an amusing script.  The unorthodox opening titles tell you from the outset that this film is different.  Oh, and wait until you see the Stan Lee cameo!

The film also differentiates itself with a sense of self-awareness.  Deadpool regularly breaks through the “fourth wall” and talks directly to the audience.  He’s not afraid to mock the superhero genre either.  There’s a great scene where Deadpool is about to kill a villainous henchman but then he realises that they’re old friends.  It’s reminiscent of the Austin Powers movies.

The narrative is a little weaker when it comes to the villain – a guy called Ajax (Skrein) who was responsible for the mutation therapy.  He gets under your skin and his signature moment involves a capsule that deprives the occupant of oxygen.  That said, it’s hard to understand why he’s so villainous and what Wade was hoping to get from his services in the first place.

I’m not sure if this has the material to justify multiple sequels but as a stand-alone superhero movie, it’s about as much fun as you could ask for.