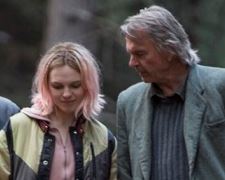 “We may be through with the past, but the past ain’t through with us.”  It’s one of my favourite lines from Paul Thomas Anderson’s Magnolia.  A masterpiece of cinema, Anderson’s 3-hour epic featured a group of inter-connected characters living in Los Angeles who were in search of forgiveness for past misdeeds.

That quote feels appropriate when getting to the heart of The Daughter.  It’s set in a small Australian town that is on the brink of collapse.  The local sawmill has been providing work for more than a century but times are tough and it’s about to close its doors for the last time.  Residents are already packing up their belonging and heading to bigger cities in search of new opportunities.

The gloomy mood hasn’t put a stop to the plans of Henry (Rush), the mill’s owner and a well-respected member of the community.  He’s getting remarried in a few days and his much younger wife-to-be, Anna (Torv), has meticulously planned a lavish reception.  The event is also significant because of the attendance of Henry’s son, Christian (Schnedier).  He now lives in the United States and this is his first trip back to his birthplace in more than 15 years.

Henry and Christian put on a few smiles but it’s clear they have a strained relationship.  Henry invites him a special pre-wedding dinner but Christian chooses to catch up with old friends instead.  Instead, he spends the night catching up with two childhood friends who have tied the knot – Oliver (Leslie) and Charlotte (Otto).  They now have a teenage daughter, Hedvig (Young), who is in search of romance and adventure.  Also in the mix is Oliver’s retired father, Walter (Neill).

This is a film you need to be patient with.  There’s a lot of backstory and time needs to be spent building the relationships between the respective characters.  Writer-director Simon Stone uses quick, overlapping scenes to keep things moving at an appropriate pace.

You’ll have a sense that it’s leading up to something significant and yes, that’s exactly what happens.  The film’s tagline eloquently phrases it – “keep your family close and your secrets closer.”  Skeletons are pulled from the cupboards and lives will be changed forever.  Everyone should be able to relate.  No matter how hard we try, there’ll always be a time when our emotions get the better of us and we’ll say stuff that we immediately regret.

The narrative is loosely based on The Wild Duck, a 19th Century work from Norwegian playwright Henrik Ibsen.  Stone adapted it for the stage in 2011 (it won 4 Sydney Theatre Awards) and decided it also work as a feature film.  Academy Award nominated producer Jan Chapman (The Piano) saw the stage play and also decided to jump on board.

These characters have to suffer a heavy emotional toll and thanks to some outstanding performances, those same feelings will resonate with audiences.  I’d never heard the name Odessa Young a few months ago but after her powerful appearance here and in Looking For Grace, I’m convinced she’s got a bright future.  It’s hard to single anyone out though.  The likes of Geoffrey Rush, Sam Neill and Ewen Leslie are equally good.

Selected to screen at lucrative film festivals in Venice, Toronto and London, The Daughter again shows that Australians can make great films.

You can read my chat with director Simon Stone by clicking here.