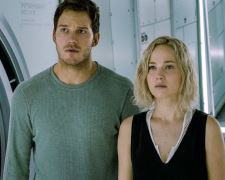 Science-fiction can be formulaic and predictable (the same as any genre I guess) but the scenario explored in Passengers grabbed my attention.  It’s set in the not-to-distant future where the Earth has become rundown and overpopulated.  Wealthier individuals have bought tickets on a spacecraft that transports them across the galaxy to a new, exciting, inhabitable planet known as Homestead II.  The catch is that the journey takes 120 years.  Don’t stress though.  You spend the entire time in a hibernation pod and you’ll look and feel exactly the same when you arrive.

When Jim Preston (Pratt) wakes from his pod, he shrugs off the sleepiness and gets ready for a new life.  That is until he realises something is amiss.  None of the crew or 5,000 other passengers have woken up.  A quick investigation reveals that he’s woken up too early.  His pod malfunctioned (something thought to be impossible) and there’s still 90 years left on the journey.  With no way of going back into hibernation, he’s destined to spend the remainder of his life helpless and alone.

It’s at this point where I have to talk about a key plot development that isn’t specifically mentioned in the film’s trailer.  If you want to avoid it, read no further.  I think it warrants discussion because it occurs inside of the first half-hour and is critical to the remainder of the film.  Anyway, after spending a full year alone and going through all of its mental side effects, Jim decides to wake another of the sleeping passengers so that he’ll have company.  He picks Aurora Lane (Lawrence) because of her good looks and interesting profile (she’s the daughter of an acclaimed writer).

All of this should leave you thinking.  What would you do in the same situation?  By waking her up, she’s condemned to the same fate.  Both of them will be dead by the time the ship reaches Homestead II.  Is it the same as murder?  Or is such an act forgivable?  The screenplay from Jon Spaihts (Prometheus, Doctor Strange) will leave you questioning the actions of both characters as the credits start to roll.  There will be different opinions.

Outside of that intense moral quandary, the film doesn’t have quite enough to material to hold your attention for two hours.  You simply watch Jim and Aurora walk around the ship, eat their breakfast, and go through their daily exercise routines.  It doesn’t set a fast pace.  To help understand what’s going on inside their heads, they regularly chat with a robot bartender (Sheen) who provides both drinks and conflicting advice.  That’s largely it when it comes to the cast.

Problems develop with the ship’s mechanics and this is clearly designed to inject action and suspense into the narrative.  There’s a particularly good scene when the artificial gravity machine malfunctions while Aurora is using the ship’s swimming pool (which comes complete with a view of the universe).  It’s just a shame the safe finale doesn’t take a few more chances and offer something more memorable or unexpected.