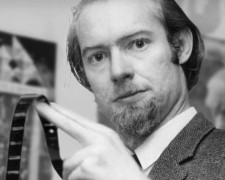 David Stratton is someone I have admired and respected for as long as I’ve been a film critic.  I can remember watching The Movie Show as a teenager where David and co-host Margaret Pomeranz sounded off about the week’s new release movies.  It was fun when they disagreed but there was also a sense of validation when they echoed my own thoughts.  Baz Lurhmann’s Romeo & Juliet was my favourite film of 1996 and both David and Margaret gave it 5 stars.

The ABC recently commissioned a three-part television series whereby David Stratton would reflect back on the history of Australian cinema and some of his favourite movies.  That will go to air later this year.  However, as part of that process, director Sally Aitken felt there was another great story to tell.  That’s how this film was born – a documentary chronicling the life of Australia’s most well-known film critic.

The most interesting attribute of Aitken’s film is the way it draws links between David’s life and the plots of iconic Australian films.  After growing up in the United Kingdom, Stratton moved here in 1963 to accept a position as Director of the Sydney Film Festival.  It was a huge cultural shift for David and a comparison is made with one of his all-time favourites, Wake in Fright (1971).  The same treatment is applied to the classic Muriel’s Wedding (1994).

David estimates that he’s seen roughly 25,000 movies across his 77 years.  That’s close to an average of one per day.  It shows that his love and passion for the craft has endured since being introduced into movies at a very young age.  He still has notes and scrapbooks from this first reviews he wrote as a kid.

Throughout this documentary, we hear from acclaimed actors and filmmakers as they weigh in with their own thoughts on David.  There’s George Miller, Nicole Kidman, Hugo Weaving, Bryan Brown, Judy Davis and Gillian Armstrong.  That’s just a small sample.  There’s also a great story about Geoffrey Wright’s Romper Stomper (1992) that sparked additional controversy after David refused to review it.

Many will be surprised to learn about David’s upbringing and emigration to Australia.  His parents were furious that he’d accepted the position at the Sydney Film Festival.  They didn’t see it as a career and they always expected him to stay at home to carry on the family business.  David realises that he was taking a big gamble and history shows that he was clearly rewarded.

If you’re a fan of Stratton or a lover of Australia cinema, this should keep you interested all the way through.

You can read my interview with David Stratton by clicking here.