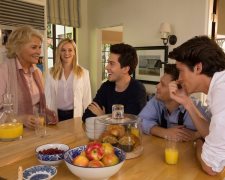 Rich people are no happy than you or I.  Whether you believe in that saying or not, it’s put to good use during the early scenes of Home Again.  It is centred on Alice (Witherspoon), a 40-year-old woman from Los Angeles at the crossroads of her life.  When we first meet her, she’s crying in front of her bathroom mirror.  She recently separated from her husband (Sheen) and is trying to come to grips with how the world works as a single mum with two young children.

In terms of what Alice does for work, that’s a bit of a mystery.  She’s ordered a fresh batch of business cards and is looking to move into interior design.  It’s more of a “need something to keep me busy” hobby than a legitimate career.  She doesn’t need the money as her father was a successful film director.  He left Alice with a beautiful home and a large bank account when he passed away.

Convinced by her girlfriends to go out partying one night, Alice hooks up with Harry (Alexander), a 20-something-year-old who yearns of being a filmmaker.  Harry, his brother (Wolff), and his best friend (Rudnitsky) are trying to forge a career in Hollywood but fame and fortune are hard to come by.  With almost no money to their name, Alice allows them to move into her guest house (wish I had one) for a few weeks while they finish work on a make-or-break script.

The arrival of the three guys changes the dynamic of the house – mostly for the better.  Alice’s eldest daughter has been battling anxiety issues (she even asks for anti-depressants) but gains much needed confidence from her new housemates.  Alice’s mother, Lillian (Bergen), is also excited by developments and is doing her best to push Alice and Harry closer together.

Home Again marks the debut feature film of writer-director Hallie Meyers-Shyer.  She had a little help breaking into the industry.  Her parents are Charles Shyer and Nancy Meyers – a power couple in Hollywood who have helped create films such Private Benjamin, Father of the Bride, What Women Want, Something’s Gotta Give and It’s Complicated.  They were also behind the 1998 remake of The Parent Trap where they named the two twins after their own daughters – Annie and Hallie.

This isn’t a life changing movie but there are a few points of difference that make Home Again worth watching.  It tries to break away from the traditional “boy gets girl, boy loses girl, boy gets girl” formula.  Alice isn’t someone who must be attached to a man to make their life better.  The support and friendship offered by the three guys is just as valuable.  It’s an interesting dynamic and I laughed at a line where she jokingly describes what they individually provide – sex, childcare and a business website.

Home Again is at its best when things are going well within the household.  The banter between the characters is fun and insightful.  The two children are particularly adorable.  The film feels less authentic when trying to create tension.  A missed dinner date causes an unnecessary level of drama.  A scene involving Alice’s husband and a punch-up is borrowed from the rom-com textbook.  I’d also argue that Harry’s ongoing interaction with his agents is an unnecessary distraction that soaks up screen time.