Review: The Flip Side 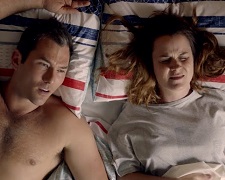 Ronnie (Taheny) isn’t having a good run.  She runs a small café in Adelaide but the customers are few and the bills are many.  She’s even reached the point where she’s lying to her bank manager to get extended credit.  Also causing stress is the fact that her elderly mother, who suffers from dementia, is about to get kicked out of her nursing home because Ronnie can’t afford the weekly rent.

You’d think that Ronnie would be offered financial and emotional support by her long-time boyfriend, Jeff (McKenzie), but she’s compounded her troubles by telling him nothing.  He’s bringing in no income because he quit his job as a school teacher to become a writer.  His latest idea is to write a short story about a spider who falls in love with a girl but he seems to spend more time on the couch than at his desk.

All of those troubles are pushed to the side when Ronnie receives an unexpected visit from Henry (Izzard), a successful British film star with whom she had an affair 5 years ago while he was shooting a movie in Australia.  Ronnie had high hopes for their future but when the movie wrapped, Henry went back to London and was never heard from again.  She was crushed and heartbroken.

What follows is a tumultuous love quadrangle.  Henry is visiting Australia as part of a film publicity tour with his French girlfriend, Sophie (Guide), but it’s clear he still has feelings to Ronnie and is seeking forgiveness for his past errors.  This leaves Ronnie weighing up her relationship with Jeff who isn’t squeaky clean himself given his eyes are wandering towards Sophie.  It’s going to get messy.

It’s apparent that writers Marion Pilowsky and Lee Sellars are trying to give the romantic comedy genre a shake-up.  The fact there are 4 players in this ensemble (as opposed to 3) provides a slight twist.  It’s also likely to keep you guessing.  Given rom-coms are so predictable and formulaic, I was surprised to find myself in a position where I had no idea as to the fate of these characters at the half way mark.

The problem here is with the execution.  The dialogue is contrived, stuffy, over-written and resembles something from an outdated 80s sitcom.  The small talk is particularly bad as they the quartet sit around the dinner table and talk about their respective lives.  The subplot involving the mother (Bursill) and the “villainous” boss (Sheridan) at the nursing home doesn’t have much relevance.  The same could be said of Tiriel Mora’s quick cameo as a mechanic.

The Flip Side has good intentions but it struggles to make an impact.