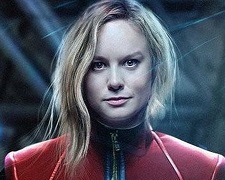 2018 was one of the best (if not THE best) year in terms of superhero movies.  Black Panther became the first superhero flick to be nominated for best picture at the Academy Awards (winning for best costume design, production design and original score).  Avengers: Infinity War enthralled audiences with its cliff hanger finale and became just the 4th movie in history to gross $2 billion USD at the worldwide box-office.  Spider-Man: Into the Spider-Verse won the Oscar for best animated feature and surprised many with its creative premise.

Captain Marvel is the 21st movie to be released in the Marvel Cinematic Universe.  It’s taken a long time but finally, we have a film where the heroics are left entirely to a female character.  Marvel has generally proven themselves to be better than their DC rivals (in terms of quality and box-office) but this is one area where DC beat them to the punch given the deserved success of Wonder Woman in 2017.

The purpose of Captain Marvel will be obvious to fans of the genre.  After half the universe was decimated at the end of Avengers: Infinity War, the film ended with Nick Fury (Jackson) activating an old pager that sent a rescue message to Captain Marvel (Larson).  Since her character had yet to be introduced into the franchise, a stand-alone movie was required to explain her background prior to the release of Avengers: Endgame next month.

I’ll cut to the chase and say it’s a standard, kind-of-seen-it-before origin tale.  We’ve got a hero learning about their abilities and we’ve got some one-dimensional villains who just want to be powerful and controlling.  There’s no shortage of action scenes but they’re heavy on special effects and light on emotional resonance.  I couldn’t help but think of the intense ritual combat sequence between Chadwick Boseman and Michael B. Jordan in Black Panther.  It’s those strong, potent moments which are missing here.

The film borrows from a formula which has worked successfully in the Guardians of the Galaxy franchise.  Guardians continually pays homage to the 1980s and so Captain Marvel does the same to the 1990s.  When she lands on Earth for the first time, star Brie Larson crashes through the roof of a Blockbuster video store and shoots a giant cardboard standee advertising True Lies (the Arnold Schwarzenegger movie from 1994).  It’s one of many references to the era and if you’re a fan of 90s music, you’ll know the lyrics to most songs on the soundtrack.

If you need a quick tease in terms of storyline, Captain Marvel comes from the civilisation of Kree – a harmonious society ruled by a mysterious “supreme intelligence” who ask “you put your people’s needs ahead of your own”.  They’re about to go to war with the Skrulls – an alien race who are inherently dangerous because of their ability to transform into other creatures (one of them even has an Aussie accent thanks to Ben Mendelsohn).  The over-emotional Marvel, under the tutelage of an experienced mentor (Law), finds herself caught in the middle as they fight for control of a valuable light speed engine.

Captain Marvel is watchable but it struggles to get out of first gear.  This is most evident during the closing credits when we get a fleeting glimpse of Avengers: Endgame and the key role the character will play in teaming up with the remaining Avengers and taking down Thanos.  That 30-second glimpse is more memorable and intriguing than the two hours which precedes it.