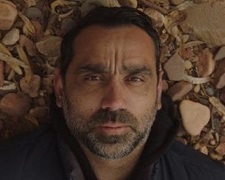 Given the seemingly endless list of topics that could appeal to a filmmaker, it’s surprising to see two Australian-made documentaries about AFL footballer Adam Goodes being released in the space of a few months.  The Final Quarter, directed by Ian Darling, was a narration-free doco that relied solely on archival footage to highlight the racism endured by Goodes during the final years of his playing career.  It premiered at the Sydney Film Festival in June and then aired on the 10 Network in July (where it was watched by roughly 589,000 viewers).

In tackling the same subject matter, Australian writer Stan Grant and British director Daniel Gordon (an Emmy nominee for a 2014 documentary about the Hillsborough disaster) have gone with a different approach.  It features a wide range of face-to-face interviews and is telling a much broader story.  To quote Grant – “It isn’t about what happened on a football field in one particular season.  It’s about the 200 years that lead to that and who we are as a nation.”

It’s an apt way of describing The Australian Dream.  There are scenes that look at Goodes’ achievements on the field and the racist taunts (particularly on social media) he was subjected to during his last year playing for the Sydney Swans in 2015.  However, to understand why Goodes felt so angry and saddened by the abuse, the film spends an equal amount of time delving into his upbringing and the broader plight of Indigenous people in this country over the past two centuries.

The interviewees include those who played the game such as Michael O’Loughlin, Nicky Winmar, Gilbert McAdam, Nathan Buckley and Paul Roos.  Others who share their thoughts on camera include TV/radio personality Eddie McGuire, journalist Tracey Holmes, Olympic gold medallist Nova Peris, politician Linda Burney and political commentator Andrew Bolt.  I’m sure they could all talk about this topic for hours but Gordon has included just the right amount from each to get the message across.

This is an affecting documentary.  Most of us know Adam Goodes the footballer (two Brownlow Medals, two premierships) but the film digs much deeper and helps us appreciate Adam Goodes the person.  He comes across a passionate, articulate, persuasive spokesman for Indigenous people here in Australia.  His views provide much “food for thought” on casual racism in society, teaching Indigenous history in schools, and the significance of Australia Day each year.  It left an impact on me.

It’s bizarre to see the film rated MA in Australia for its “themes of racism and strong course language”.  It’s a movie that should be seen by people of all ages and not just those over the age of 15.  Yes, profanity is used but it’s only to show the disgusting language used against Goodes by crowds at games and trolls on social media.  It raises another worthy conversation starter about the way professional athletes are sledged online and the effect it can have on their mental health.

My wish is that every Australian see this film.  Just moments after leaving the theatre, I read a report on Twitter that a football player for Manchester United, Harry Maguire, was subjected to a torrent of racial abuse on social media after missing a penalty shot.  The world still has a long way to go when it comes to stamping out racism.