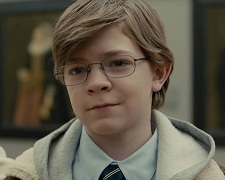 In April 2014, American author Donna Tartt won the Pulitzer Prize for Fiction for her third novel, The Goldfinch.  The judges described it as “a beautifully written coming-of-age novel with exquisitely drawn characters” and “a book that stimulates the mind and touches the heart.”  Warner Bros. acquired the film rights later that year and director John Crowley (Brooklyn) was given the task of bringing Tartt’s work to the big screen.

It’s hard to review this movie without acknowledging the heavy baggage it has accumulated over the past few weeks.  The positive adjectives used to praise the novel were not replicated in explaining the film.  At its Toronto Film Festival world premiere, leading critics described The Goldfinch as “morose” (Variety), “emotionally muted” (BBC), “uninvolving” (Washington Post) and “textureless” (The New Yorker).

The reception wasn’t any warmer when released widely in U.S. cinemas the following week.  It earned a dismal $2.6 million across its opening weekend (the budget was $40 million) with the President of Domestic Distribution at Warner Bros. conceding “there were many things that didn’t work.”  Star Ansel Elgort also weighed in by acknowledging the negative feedback but asking audiences to give it a chance because he believes “there is a lot of good in the film too.”

Elgort is right (to an extent).  There’s a part of me that was drawn into this interesting world and the alluring cinematography of Roger Deakins (Blade Runner 2049).  The central protagonist is Theodore Decker (Fegley), a shy 13-year-old who loses his mother following a terrorist attack at New York City’s Metropolitan Museum of Art.  The remainder of the film follows Theodore (the older version is played by Elgort) as he interacts with an array of characters including his alcoholic father (Wilson), a struggling antique dealer (Wright), a Ukrainian friend (Wolfhard) and a kind-hearted socialite (Kidman).

The problems with the movie are easy to spot.  It struggles when it comes to character development and relevance.  Theodore wanders from place-to-place but I was never sure what he, or anyone else for that matter, was searching for.  It’s therefore hard to see and understand how these characters have evolved across the lengthy 149 minute running time.  What have they learned by film’s end?  What are audiences supposed to take away?  The fact some subplots are rushed (such as Theodore’s out-of-nowhere engagement) adds to its confusing nature.

The hardest thing to grapple with is the film’s insistence to link everything back to a stolen artwork.  While fleeing The Met in the minutes following the terrorist attack, Theodore takes an extremely valuable painting (it had fallen on the ground) and takes it back to his home.  It’s a bizarre, clumsy storyline that is referenced every 15 minutes or so but lacks logic and purpose.

If there’s one clear realisation from The Goldfinch, it’s that a good book doesn’t always equal a good movie.