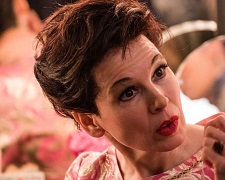 Ever seen Peter Weir’s The Truman Show? It’s one of the great films in the history of cinema. Jim Carrey’s character is, unknowingly, surrounded by paid actors in a fake world. He doesn’t have a life of his own and there isn’t an opportunity for the true Truman Burbank to evolve.  He’s being controlled like a science experiment and his sole purpose is to entertain millions of people around the world on TV.

There are parallels with the real-life story of Judy Garland. Born in 1922, Garland was just 2 years of age when she first performed on stage at her father’s movie theatre. By the time she was 18, Garland had appeared in 11 feature films and won a special Academy Award for her iconic performance as Dorothy in The Wizard of Oz (1939).  In the same vein as Truman Burbank, she spent almost her entire life in the public eye and was controlled by studio executives like a puppet.

Based on the stage play by Peter Quilter and adapted by Tom Edge, Judy covers Garland’s teenage years by way of intermittent flashback.  She was prohibited from eating fatty foods and given special tablets to supress weight gain.  She was forced into arranged friendships/relationships to boost her notoriety in the tabloids.  She worked ridiculously long hours for bossy directors.  If she ever complained, studio big-wigs would threaten to fire her and bring in fresh talent.

These scenes are informative but they’re not the crux of Rupert Goold’s film.  Rather, the movie focuses on a period in 1969 when a 46-year-old Garland (played Renée Zellweger) travelled to London to perform a series of stage shows for her adoring fans.  It was a trip of necessity as opposed to desire.  Her celebrity had waned in the United States and, as a result of some bad financial decisions, she was both homeless and penniless.  The London gig was offering £2,500 a week and it was a chance to reignite her sagging career.

Judy is an interesting character study.  There are times when we see Garland at her best.  Despite nerves and apprehension, she gathers her composure for a beautiful rendition of “By Myself” as her first song on the London stage.  Director Rupert Goold captures the emotion of that moment by shooting it with a single camera and no edits.  There’s another nice scene where she spends an evening with two fans who have worshiped her for decades.

On the flip side, there are times when see Garland at her worst.  She has an addiction to alcohol and prescription medication that is clearly affecting her life.  She also comes across as spoilt, self-entitled and unreliable.  She’s rude to her obliging assistant (Buckley) and often disrespectful to audience members who have bought tickets to her shows.  Are her problems self-inflicted?  Or are they the result of a tough upbringing and career?  I’m sure audiences will be divided.

Judy struggles in connecting the 1960s narrative with the 1930s flashbacks.  Goold is trying to help us “get inside” Garland’s head and explain why she’s become such an anxious, complex person.  These scenes are promoting empathy but I’m not sure they fully explain the version of Garland we know by film’s end.  It feels like we’ve only scratched the surface and her troubles are far deeper.

However, the weaknesses in the script are negated by the stunning performance of Renée Zellweger (Cold Mountain, Chicago).  The casting is perfect and she does a wonderful job capturing Garland’s blend of egotism and insecurity.  It’s also worth noting that Zellweger performed all the songs herself after a full year of training with high-profile vocal coach Eric Vetro.  An Oscar nomination is a certainty and if you believe the current bookmakers’ odds, a victory speech will be required.