Review: After the Wedding 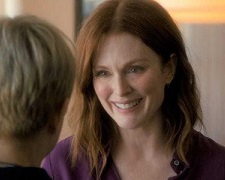 After the Wedding joins the likes of Cold Pursuit, The Kindergarten Teacher and Gloria Bell as foreign language movies to have been recently adapted into English to appease those who dislike subtitles.  In this instance, the original was a Danish drama directed by Susanne Bier which earned an Academy Award nomination for best foreign language film in 2007 (losing to The Lives of Others).

The setting and character names have been changed but for the most part, this is a close remake.  Isabel (Williams) is a middle aged American woman who has spent the last chunk of her life running an orphanage for abandoned children in India.  Isabel and the other volunteers are passionate about their work but they lack the financial resources to provide a better life for the kids who reside there.

Their prayers appear to be answered when contacted by Theresa Young (Moore), an extremely wealthy businesswoman who controls the biggest media placement company in the United States.  Theresa is keen to donate $2 million towards the orphanage but before doing so, she’s asked Isabel to travel to New York so they can meet face-to-face and discuss plans.

It’s at this point where things get a little strange.  The pair meet on a Friday morning but instead of Theresa signing the deal and writing out a cheque, she asks for extra time to fully consider the proposal.  Realising that Isabel has been inconvenienced and cannot immediately return to India, Theresa provides an invitation to her daughter’s wedding which is scheduled to take place the next day.  It’s an odd request and Isabel is somewhat troubled by the fact she’s attending a wedding where she doesn’t know a single guest (including anyone in the bridal party).  Theresa even offers to buy her a dress!

There are a few twists in this tale and so it’s unfair for me to reveal the surprises for those unfamiliar with the Danish original.  What I can say is that there are plot developments that come across as artificial and manufactured.  Highlighted by a meeting between Isabel and Theresa’s daughter (Quinn), it feels like all these characters are tiptoeing around certain subject matters for the purpose of prolonging the narrative.  Why are they so afraid of asking obvious questions?

It’s hard to point the finger of blame at Julianne Moore (Still Alice), Michelle Williams (Brokeback Mountain) and Billy Crudup (Almost Famous).  They’re doing their best with the limited material and it’s nice to see such a quality group of actors sharing the screen together.  I only wish that the emotion displayed by their respective characters was the equal of that experienced by the audience.