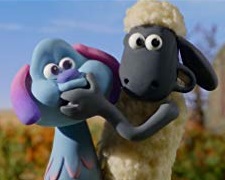 With animated features seemingly being released every second week in Australia, it’s becoming harder to stand out and create something that is both entertaining and original. Aardman Animations ticked those boxes in 2015 with The Shaun the Sheep Movie. It featured no dialogue and yet these cute animals and its human owner, were able to convey emotion and tell a story in the same vein as great silent actors from the early 20th century.

The same techniques have been utilised by directors Will Becher and Richard Phelan for this follow-up sequel - A Shaun the Sheep Movie: Farmageddon. Rather than clear, spoken words, you’ll be required to pick up the gist of the story through grunts, bleats, sighs and mutterings. It makes it the perfect movie to take internationally since it can be understood by people of all ages without the need to read subtitles.

While any movie with thinking, active sheep would be considered fantasy, you’d argue this new instalment is a little more whimsical than its predecessor.  A cute blue alien named Lu-La crash lands at Mossy Bottom Farm and it’s the responsibility of the sheep to keep Lu-La hidden whilst also working on a strategy for her to return home.

It’s not quite as good as the original but Farmageddon is easy to like.  Shaun the Sheep, named as a play on the word “shorn”, is cool character who kids will engage with.  The same can be said of the broader ensemble which include the farm’s owner, who walks around in a state of ignorant bliss, and the intuitive sheep dog who is harder to fool.  We’ve come a long way since Shaun was first introduced in Nick Park’s 1995 Oscar winning short film, A Close Shave.