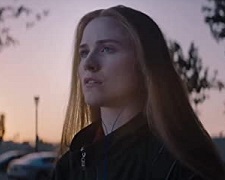 Kids will always be shaped and influenced by the views of their parents but at some point, they reach an age where they start to develop their own sense of identity.  In the case of the lead character in Kajillionaire, that moment has arrived at the ridiculously late age of 26.  Her name (a terrible one) is Old Dolio (Wood) and she has spent her entire life addressing the needs of her repressive mother (Winger) and father (Jenkins).

It’s hard to believe the family has stuck together and survived for so long.  They’re all unemployed and so they make a living as petty thieves.  One of their more popular gigs is stealing parcels from post office boxes and hoping they get lucky with what’s inside.  Their efforts haven’t amounted to much.  They’re so poor that they live in a derelict office (the rent hasn’t been paid for months) and they catch public transport when travelling from crime to crime.

At its heart, Kajillionaire is a character study where Old Dolio finally realises her parents are not the people she thought them to be.  The catalyst for change is Melanie (Rodriguez), a young woman who they meet on a plane and then bring in as a partner for some easy scams.  Old Dolio, who never seems to have had a friend her whole life, becomes close with Melanie and starts to re-evaluate her view of the world.

You’ll feel sorry for Old Dolio.  Her dad remarks that she learned how to forge before she learned how to write.  When she goes into a supermarket, her first instinct is to look for security camera locations and determine which aisles are easiest to steal from.  It’s as if she’s spent 26 years in a cult and, with limited exposure to others, learned no morals and developed next-to-no social skills (complete with a dry, monotone voice).

Written and directed by Miranda July (Me and You and Everyone We Know), Kajillionaire is framed as a dark, offbeat comedy that’s loaded with distinctive characters and imagery.  From the crying landlord… to the confused masseuse… to the dirty pink bubbles floating down the walls, there’s plenty of eyebrow raising material to keep your attention.

The performances also deserve a shout-out with Evan Rachel Wood (Thirteen) using an unusually deep voice to help define her quirky character.  Oscar nominees Richard Jenkins (The Visitor) and Debra Winger (Terms of Endearment) are also terrific as the two parents and they become more and more unlikeable (in a good way) as the film progresses.

Kajillionaire is both strange and entertaining.  That’s good enough for me.