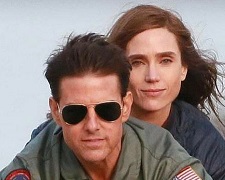 A teaser trailer was revealed in July 2019 but since that time, the release date for Top Gun Maverick has been moved a gazillion times due to extra post-production work and the impact of COVID-19 on movie theatres.  I’ve joked with friends that perhaps the film didn’t exist at all and this was a giant ruse on the part of Paramount Pictures!  Thankfully, the wait is now over.  36 years after the release of the original movie and more than 3 years after shooting wrapped, the much-anticipated Top Gun Maverick has arrived in cinemas across the globe.

A close friend described it as “the best sequel since The Empire Strike Back” and while that may not be wholly true (Mad Max: Fury Road springs to mind), the intent of his statement has merit.  This is a sensational film that surpasses its predecessor in almost every way.  The flight scenes will have you twitching in your seat, the splashes of comedy are perfectly timed, and the story is kept short and straightforward.  I can’t imagine too many people being disappointed.

To quickly cover the narrative, pilotless planes are the way of the future with experienced military pilots told they are “heading for extinction”.  That won’t stop Maverick (Cruise) from proving himself one final time.  At the request of an old friend (Kilmer), he is brought back into the Top Gun training program to enhance the F-18 flying skills of 12 young pilots described as “the best of the best”.  The reason?  They’ll be needed on an incredibly dangerous mission to destroy a heavily guarded uranium enrichment plant which threatens the world order.

It’s as simple as that.  To the film’s betterment, time isn’t wasted developing (or even identifying) the villains.  You’ll just have to picture some Christoph Waltz-style baddie with an Eastern European accent with any army of incompetent henchmen who want to obliterate mankind.  This frees up the writers to focus solely on the rebellious Maverick, his interaction with the Top Gun graduates, and a quick-fire romance with an old flame (Connelly).  The closest we get to a “bad guy” is a humorous yet straight faced performance from Jon Hamm as a Vice Admiral who doesn’t think too highly of Maverick and his unorthodox training methods.

It’s a two-hour movie centred on a single mission but it still moves at a cracking pace thanks to the editing skills of Eddie Hamilton (Mission: Impossible – Fallout).  Rather than watch the in-the-air training runs and then the subsequent on-the-ground debriefs, Hamilton overlays these sequences to save time and maintain the film’s energy.  It all leads to a spectacular action climax which, to promote Hamilton again, is edited in a way which is easy to comprehend.  It doesn’t fall into the trap of being too chaotic.

Knowledge of the 1986 original will help but it’s not essential.  There’s a short flashback and a few well-placed photos that provide background for newcomers.  The emotional core of the film is centred on Maverick befriending Rooster (Teller), the son of his former colleague/friend who died in the earlier movie.  There’s tension between the pair from the outset but given Rooster is one of the selected F-18 pilots, they need to mend bridges and move forward.  The entire cast deserve praise for their performances but the banter between Tom Cruise and Miles Teller set them a notch above the rest.

Directed by the creative Joseph Kosinski (Tron: Legacy), Top Gun Maverick offers a full, complete experience within the action genre.  One of the year’s best.