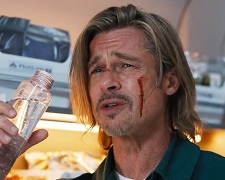 It’s an easy setting to describe.  We’ve got the famous bullet train in Japan which takes about three hours to travel from Tokyo to Kyoto.  On board is the son of a famous crime lord, a locked briefcase containing $10 million, and a bunch of experienced assassins with missions to complete.  It may sound intense but the narrative is given the lightest possible touch by director David Leitch (Deadpool 2).  There are heavy splashes of blood/gore but for the most part, this is crafted as a comedy.  The characters spend that much time delivering witty one-liners that they barely have time to fight for their lives.

Bullet Train features a substantive, handsomely-paid cast.  Headlining the bunch is Brad Pitt as a self-described “unlucky” guy who, despite a pessimistic view of the world, seems to be doing okay.  His particular assignment is simply to steal the briefcase and get off the train and the first stop.  The other assassins have more complex agendas but, as we learn through rushed flashbacks, they all seem to have a connection with a mysterious figure known as “The White Death”.

This is a movie where the colourful train, hip soundtrack and famous actors provide a “gloss” that mask its flaws and unoriginality.  It’s the same jokes used again and again and again.  As an example, Brian Tyree Henry plays a hitman who, having loved the show as a child, uses Thomas the Tank Engine metaphors when describing adversaries.  It’s a quirk that’s funny at first but is quickly overused.  The same applies to a cameo from a well-known Hollywood actor (I won’t spoil) who pops up halfway through.

Oscar winner Brad Pitt (Once Upon a Time in Hollywood) oozes charm but it’s not enough to compensate for his one-dimensional character who barely raises a sweat, and nonchalantly rambles on about bad luck and philosophy.  The overarching theme of “fate” is beaten into audiences as if we’re a puppy dog who needs constant training and reminding.  I wanted to shout at the screen – “I got it the first five times you said it!”

It’s rare to be saying this about an action comedy but the film’s strongest attributes are its art and set decoration.  The bullet train is a cool location for such a tale and the talented craftsmen give the 16 carriages (10 economy, 6 first class) a distinctive look – from the stylish bathrooms, to the sumptuous snack service, to a carriage filled with plush toys.  The action sequences, while disobeying the laws of physics at times, aren’t too bad either and offer a few surprises.

A friend summed it up best – “if this was on Netflix and starred a bunch of nobodies, it would be terrible.”  The cast do their best to elevate the material but it’s not enough to sustain interest levels for over two hours.